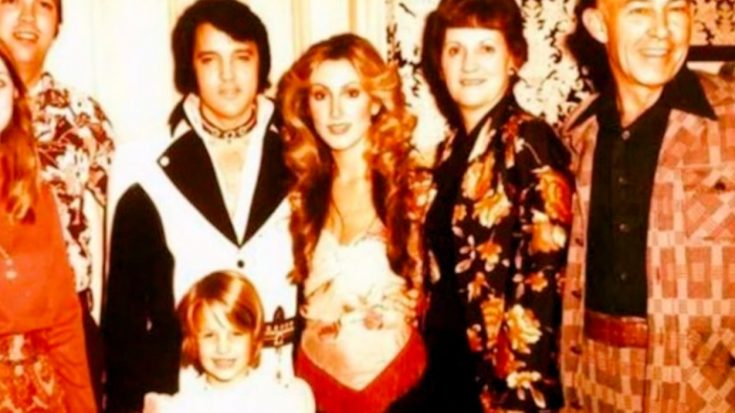 After Elvis‘ marriage to Priscilla Presley ended in divorce, “The King” found new love with a beauty pageant queen. He began dating a young lady named Linda Thompson, who was crowned Miss Tennessee in 1972.

The two dated for several years before their relationship ended in 1976. Even though Linda moved on and eventually married twice after Elvis, she still looks back on their love with fondness.

Now known as a songwriter and actress (famous for appearing on Hee Haw), Linda continues to reminisce over the years she spent with Elvis. She frequently shares photos of the two of them together, and each one is treasured by fans.

Since Linda was a fixture in Elvis’ life for so long, she also got the chance to meet his daughter Lisa Marie. Everyone who knew Elvis knew that his baby girl meant the world to them.

While you’ve likely seen the above photo of Elvis with Priscilla and Lisa Marie many times before, we bet you’ve probably never seen a picture of him with Lisa Marie and Linda at the same time.

Well in just a bit, you’ll be able to say that you have.

Taking to Instagram, Linda posted a decades-old photo of herself, some friends, her parents, Elvis, and little Lisa Marie. Linda kept the caption short, simply sharing the names of the people in the photo and the place that it was taken.

Linda is known for sharing rare photos of “The King” that few have seen before, and we’re sure this one is another gem from her collection! We’re curious…did you ever come across this photo before now?

It’s clear that even after all these years, Linda still carries a great deal of love for Elvis. You can watch her recall the time they spent together by watching her interview about him below.