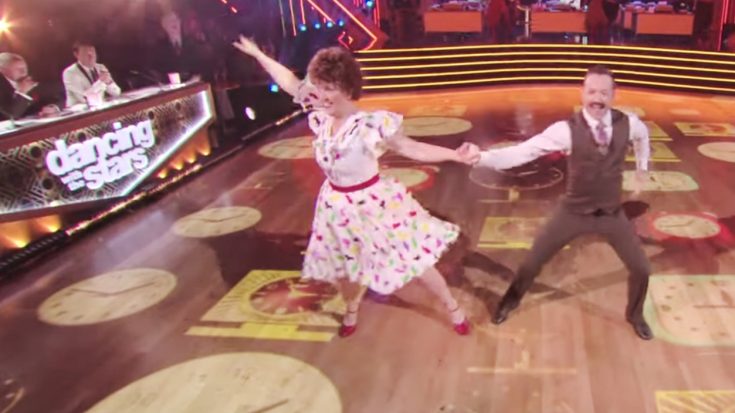 This first week of October 2019 was movie night on Dancing With The Stars!

Each celebrity and their professional partner paid tribute to an iconic movie with costumes, the song, and the set all honoring whichever movie they were assigned. Some of the movies were Selena, Ferris Bueller’s Day Off, Pretty Woman, and 9 to 5.

Kate Flannery, who is known for her role as Meredith on the sitcom The Office, was tasked with a quickstep set to the tune of Dolly Parton’s “9 to 5.”

With her partner, Pasha Pashkova, donning a mustache similar to Dabney Coleman’s character Franklin Hart and Flannery rocking an 80s-style curly hairdo, the two went all out for their quickstep!

Um, #TeamThatsWhatKateSaid just WORKED that Quickstep! Love these looks so much. ? #MovieNight #DWTS

This season, the show has asked the judges to watch more for technique, making them seem a little harsher, but when they had to critique Flannery, they had nothing but great things to say!

The judges loved what they saw and commended Pasha for teaching her the correct technique! She earned all 8s from the three judges, giving her a 24/30 – tied for the highest score of the night!