Dolly Parton Was “Not Happy” With Her 1976 Talk Show 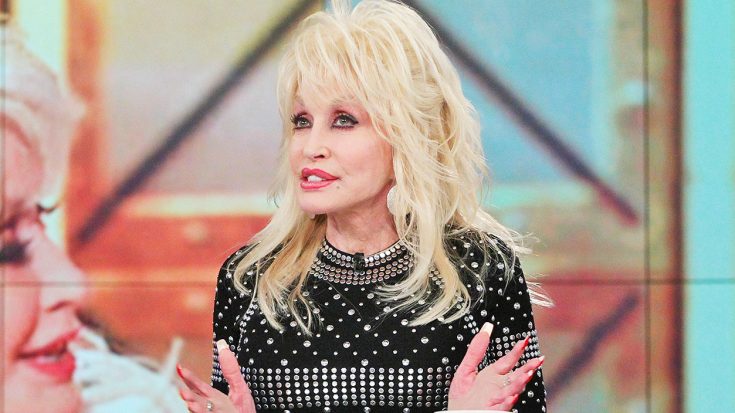 Dolly Parton made a name for herself as one of music’s most successful artists. Her 60-year career has been filled with several number one hits, endless honors, and even award-winning films. All the while maintaining her upbeat character, Dolly is opening up about the only mistake that she recalls from her career.

Good luck to everyone at the CMA Country Music Association Awards tonight! I've been a time or two in the past and it was a blast! ?#CMAawards

Dolly’s love for music sparked at a very young age. The singer began performing at her family’s church at just six years old and when she was eight, her uncle bought her first real guitar. It wasn’t long before Dolly started showcasing her golden vocals on local radio and television stations in her Tennessee hometown. From there – a star came to life.

In honor of opening night for Dolly’s exhibit at the Grammy Museum in LA, the country icon sat down with hit producer, Linda Perry about some of the singer’s biggest career moves during a Live Stream on Billboard’s Facebook. Perry worked with Dolly on her latest film, Dumplin’ and was in awe of her impeccable work ethic. Dolly hilariously responded,

“I say I’m a workhorse that looks like a show horse.”

This project has been such a joy to work on! Can’t wait for y’all to hear it!! …

After raving about Dolly’s decade-long list of successes, Perry got real with the singer about any career mistakes that she wishes she could redo. Of course, the kind-hearted talent felt everything in her career happened for a reason – whether it was viewed as a mistake or not.

“Everything I’ve ever done, even if it looked like a mistake to somebody else and even if I paid the price for it as a mistake, it seemed like the thing I was supposed to do at the time.” Dolly continued, “So I can’t say I would honestly do it any different.”

But – the singer did comment on one “mistake” that she didn’t love. Back in 1976, Dolly had her own syndicated television variety show called, Dolly! A series of performers – including Linda Ronstadt and Kitty Wells – would come onto the show and cover Dolly’s songs. The show itself had high ratings but only lasted one season. Dolly opened up about the show,

“It wasn’t what I wanted it to be and I wasn’t able to be my own self in it. There were too many other people involved.” The icon said. “It just was not good and I was not happy doing it. But I didn’t dwell on that.”

Nonetheless, Dolly felt she gained experience from it and grew as a person.

Leave it up to Dolly Parton to always have a positive outlook no matter the circumstance!

We’re live from the GRAMMY Museum with Dolly Parton for sneak peek of her iconic costume exhibit!

Posted by Billboard on Monday, February 4, 2019