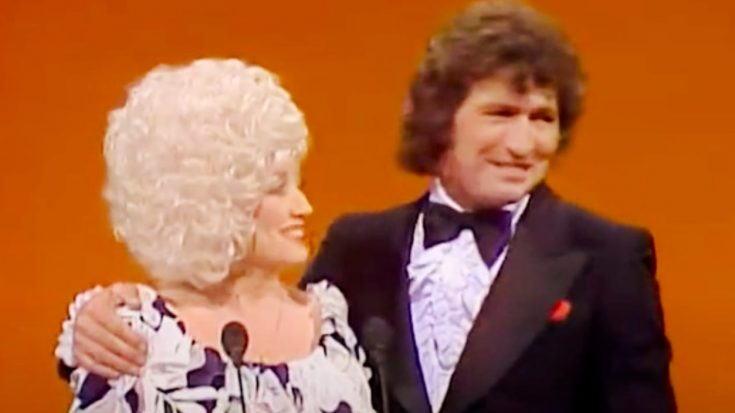 As an actor, singer, and songwriter, Mac Davis was a man of many talents. But his songwriting is what he is perhaps best known for, as he penned some of Elvis Presley‘s most memorable songs, including “In the Ghetto,” “Memories,” and “Don’t Cry Daddy.”

But long before those inductions, Davis had already earned the respect and admiration of his peers in the country music industry. One person who always served as his champion was Dolly Parton.

Mac Davis has passed away at 78.
He was Dolly’s longtime friend and collaborator. They wrote several songs together and toured together in the 1970s.
He recently appeared in Dolly’s Heartstrings Netflix series in the “JJ Sneed” episode.
We will always love you, Mac. pic.twitter.com/CIA8IVmA83

As a songwriter herself, Parton prefers to write alone, telling The Guardian in 2016, “My writing time is very private and spiritual: I hardly ever write with anybody else.”

Though there was one person Parton wrote with “every once in a while,” and that person was Davis. In her Guardian interview, she called him “one of our greater songwriters.”

Parton and Davis didn’t just write together…they also sang together. They collaborated many times through the years, most notably on their 1989 duet “Wait ‘Til I Get You Home.” The song was featured on Parton’s White Limozeen album, which was produced by Ricky Skaggs.

After being friends with Davis for so long, Parton was surely troubled when she learned he was “critically ill” after undergoing heart surgery in Nashville. She took to social media to share his family’s statement about his condition, and asked her fans to pray for him.

Sadly, Davis didn’t make it. His manager, Jim Morey, confirmed he passed away on September 29 at the age of 78.

When the news broke of Davis’ death, Parton took to social media once more to mourn the loss of her friend and former duet partner:

“Many hearts are broken today, including my own, with the death of one of my dearest friends, Mac Davis,” Parton wrote alongside an old photo of her and Davis together. “We lost one of the world’s greatest writers, singers, and entertainers.”

She expressed her condolences to Davis’ family before signing off. “Rest in peace, my friend. I will always love you, Dolly,” she wrote.

Look below to read Parton’s full post about Davis’ passing.

Many hearts are broken today, including my own, with the death of one of my dearest friends, Mac Davis. We lost one of…

We too, join Parton in expressing our sympathy to Davis’ family. They will be in our thoughts and prayers during this difficult time.

In honor of Davis, look back on one of his many former collaborations with Parton in the video below. The clip shows them performing a gospel medley in 1977.

May Davis rest in peace.