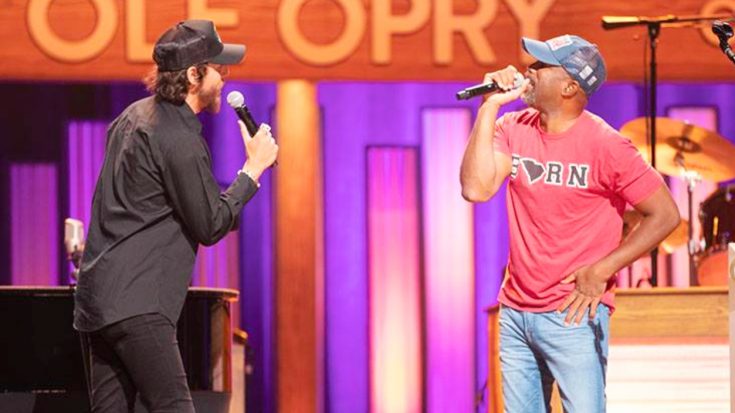 There aren’t a lot of modern country singers who love and respect the Grand Ole Opry stage and reputation the way Chris Janson does. You can tell based solely on his incredibly emotional reaction to being invited to become a member of the Opry back in February 2018.

Not many people know this, but there are requirements to being a member of the Grand Ole Opry.

According to the Opry’s website, “Membership requires a passion for country music’s fans, a connection to the music’s history, and it requires commitment – even a willingness to make significant sacrifices to uphold that commitment.”

There used to be a certain amount of times per year that a member was required to perform to maintain their membership, but in recent years, that rule has seemed to be phased out. But from the looks of it, Janson plans on keeping that particular tradition alive.

During one of his appearances since his induction, Janson teamed up with another Grand Ole Opry member, Darius Rucker, and delivered one of the rowdiest performances we’ve seen in a while! That’s because they were singing one of Rockin’ Randall’s signature songs, “Family Tradition.”

When singing this Hank Williams Jr. classic, it’s hard not to get rowdy! You can tell just how much fun these two singers were having while singing Bocephus’ 1979 lyrics. They changed up a couple of the lyrics to make it more relevant for the night they were having, but stayed pretty true to the pure country sound of the song, which included an awesome fiddle break.

Janson referenced the “Family Tradition” lyrics on social media after the performance, writing, “Country Music Singers [sic], have always been a real close family,” along with a photo of Charles Esten, himself, and Rucker on stage.

Watch Rucker and Janson bring the house down with Hank Jr.’s “Family Tradition” in the video below.