Cowgirls Kick Up Their Heels In Brooks & Dunn Line Dance 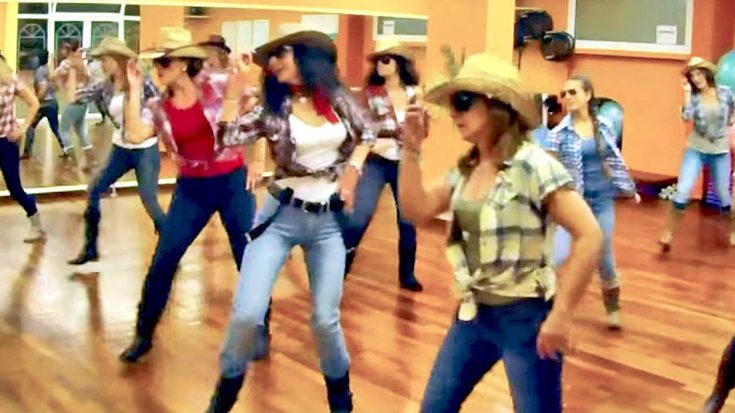 Scootin’ Into A Dance Craze

For years, country fans have pulled up their boots, grabbed their hats, and headed out to the nearest honky tonk for a night of fun. That’s when they hit the floor and dance the night away.

But these country folks don’t do any ole dance, no sir…they line dance!

Line dancing has gone hand in hand with country music for years, but there was a time when it somewhat faded from popularity. That all changed in 1992 when one popular country duo released a tune that made everyone want to get up and dance.

Called “Boot Scootin’ Boogie,” the song was recorded and released by the duo Brooks & Dunn in 1992. It was the fourth in a string of number one hits for the duo, and remains one of their most popular songs to this date.

As author Alice Randall wrote in My Country Roots: The Ultimate MP3 Guide to America’s Original Outsider Music, “Boot Scootin’ Boogie” was written by songwriters Don Cook and Scott Hendricks as a tribute to honky tonk line dancing. As to be expected, line dancing experienced a surge in popularity following the song’s release.

Since “Boot Scootin’ Boogie” kick-started the line dance craze again, there have been countless dances choreographed to the song itself.

Nowadays you don’t even have to go to a honky tonk to learn one of those dances. Thanks to one talented group of dancing cowgirls, you can dance up a storm to “Boot Scootin’ Boogie” from the comfort of your own home.

Wearing their best dancing boots, these cowgirls had a blast kicking up their heels to Brooks & Dunn’s hit tune. The dance features a series of twist, turns, and kicks, making it anything but boring to learn!

Some of the moves are more on the challenging end, but they should be easy to pick up with practice. You’ll have so much fun grooving along to this dance that the time will fly by!

So what are you waiting for? Hit play on the video below and start dancing!