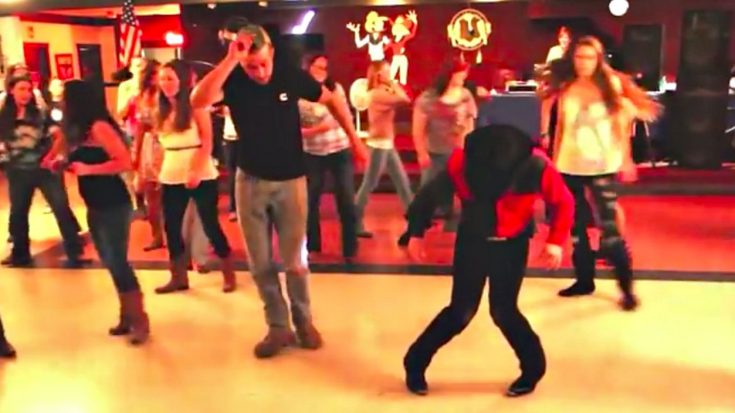 The 1990s found line dancing at the height of its popularity thanks to Brooks & Dunn‘s “Boot Scootin’ Boogie,” Little Texas’ “God Bless Texas” and Alan Jackson‘s “Chattahoochee.” While line dancing didn’t originate with the country music crowd, it became identified with the genre after Billy Ray Cyrus took “Achy Breaky Heart” to the top of the charts, securing the tune as the most popular line dance song ever.

While nearly every up-tempo country song of the ’90s had a dance named after it, one of the most popular was the dance that accompanied Tracy Byrd‘s 1994 hit “Watermelon Crawl.” The song tells the tale of a man who finds himself at a small town watermelon festival and the watermelon queen who shows him how to to the “Watermelon Crawl.”

It’s been more than two decades since Byrd’s song first hit the airwaves but it is still a popular tune for line-dance lovers. In an epic video discovered on YouTube, a light-footed cowboy can be seen showing off some impressive moves while dancing to “Watermelon Crawl” at Bob Jackson’s in Elkton, Maryland. Before long, a man from the crowd comes forward to challenge the cowboy. The result is a hysterical line-dancing battle that you have to see to believe.

“The Watermelon Crawl is a fun way for people of all ages to enjoy being downtown and sample creations featuring this sweet, summertime favorite,” Maggie Kornahrens, the event organizer for Knoxville, Tennessee’s inaugural Watermelon Crawl said. “The event also benefits East Tennessee Children’s Hospital, so it’s a good time for a great cause.”

We love a good watermelon, but think we’ll stick to line-dancing. Check out the dueling line dancers below and let us know who you think has the best moves.