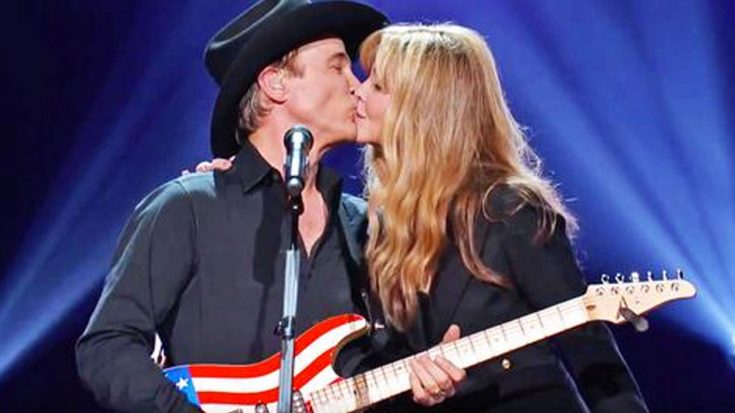 When Clint Black and his wife, Lisa Hartman, sang their duet “You Still Get To Me,” together – hearts across the nation melted.

Clint Black & Wife Lisa Hartman Put Their Love To The Test In Hysterical Game
After 25 years of marriage, the two are more in love than ever and have gotten to know every aspect of each other. They're letting you in on some of their secrets… https://t.co/657Nttu2BR pic.twitter.com/r6YaOu3Tdi

“You can put on anything, pretty dress or old blue jeans and you still get to me,” Clint sings to his wife. “First time I saw you honey you lit a flame, I started meltin’ and I still feel the same” sings back Hartman.

“Love’s still feelin’ new I still look at you that way…It’s gettin’ stronger everyday” the love birds sing in unison.

“You Still Get to Me” was released in 2015 off Clint’s ninth studio album, On Purpose. Hartman has recorded two other songs alongside Clint, “When I Said I do” and “Easy For Me to Say.” “You Still Get to Me” is their first duet together in over 14 years and hopefully won’t be their last.

Clint and Lisa got married in 1991 and had a daughter, Lily Pearl Black, back in 2001. It looks like “happily ever after” does happen!

I am so excited to announce that Lisa will be joining me for some of my Christmas shows this year. “A Clint Black Christmas” is coming to Fort Worth, Dallas, and Charles Town this December – more dates to be added soon. For more information visit https://t.co/JHmO7xGtiM pic.twitter.com/7crgMZx71N

Watch the fairytale-like video below and prepare to fall in love with love again. And let us know about your own story in the comment section to help spread the love!