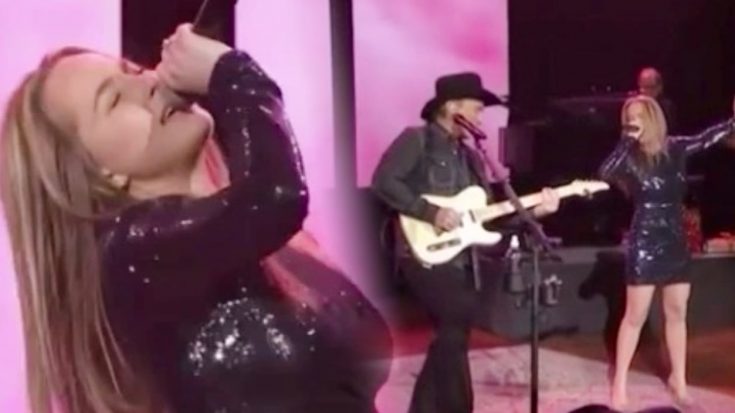 Lily has showcased her vocal talent a lot within recent years. She recorded a Christmas song with her father and has also performed with him in person few times. In October 2020, she made her Grand Ole Opry debut when Clint invited her on stage to sing a cover of Carrie Underwood‘s “Temporary Home.”

Lily received a wealth of praise following her debut Opry appearance. People complimented her beautiful voice and her engaging stage presence, calling her a natural-born performer.

So when Clint and Lisa hosted a show at the Ryman Auditorium on December 2, 2020, they made sure to involve Lily in the production as well.

She performed multiple times during the show. At one point, she delivered a cover of Kelsea Ballerini‘s #1 single from 2016, “Peter Pan.”

While there isn’t a video out there yet of Lily’s full performance, she shared a short clip of it on her Instagram.

“another one for the highlights,” Lily captioned the clip.

The video shows Lily singing her heart out while her dad stood by her side and accompanied her on guitar. You could tell he was beaming with pride by the time her performance was through.

Tune in to the video of Lily singing “Peter Pan” below to get a grasp of her talent. She has so much potential, and we can’t wait to hear her sing more in the future!

Now that you’ve heard Lily sing a few times, which song would you like to hear her cover one day?