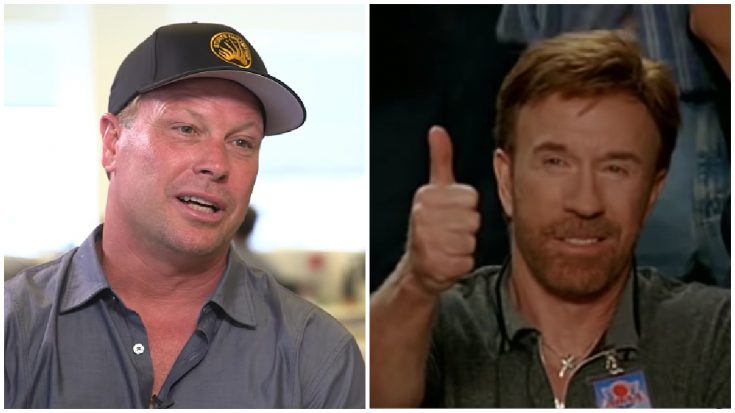 Chuck Norris has always been a larger-than-life tough guy. So, it should come as no surprise that Chuck Norris’s bad-to-the-bone-ness runs so deep that it ran into the next generation of Norrises.

Norris was only 18-years-old when he enlisted in the Air Force and was sent to South Korea where he served as an Air Policeman. It was during his time in the military that he started studying marital arts, a passion that set the course for the rest of his life. In the years following his military discharge, Norris opened martial arts schools and began to compete. His numerous championship wins led to the opportunity to appear in movies, the first being the Dean Martin film The Wrecking Crew in 1969.

At the encouragement of his friend, actor Steve McQueen, Chuck enrolled in acting lessons and the movie and television offers began to roll in. The movie and television roles Norris accepted most often allowed him to show off his martial arts skills, giving him an on-screen (and off-screen) persona as an unbeatable tough guy.

At least one of Norris’ five children have inherited his love for sport, winning and television. Eric Morris is one of two sons born to Chuck Norris and his first wife, Dianne Holecheck. Eric had an impressive NASCAR racing career that resulted in a championship in 2002.

“My whole childhood I loved racing, and I raced motorcycles,” Eric told ESPN in a 2012 interview. “I got an opportunity to race some open wheel cars, like Formula 2000, and I caught the bug. Later I had an opportunity to go race NASCAR Trucks. We had a big sponsor, but I had never done any oval racing before so I went out and got my butt kicked because I was a road racer. After doing eight races that year, I took a step back and got my own team to race in the West Series until we won a championship in 2002.”

In addition to being a NASCAR champion, the younger Norris has had a decades-long career in Hollywood as a stuntman and stunt coordinator, and even has an Emmy nomination to prove it. In 2015, Eric was nominated for Outstanding Stunt Coordination for a Drama Series, Limited Series or Movie for his work on the FX show Sons of Anarchy.

Eric is married to his wife of nearly 30 years, Stephanie, and they share four children: Camrynn, Chloe, Chantz, and Cash.

Hear Eric Norris talk about his stunt work on Sons of Anarchy in the clip below.