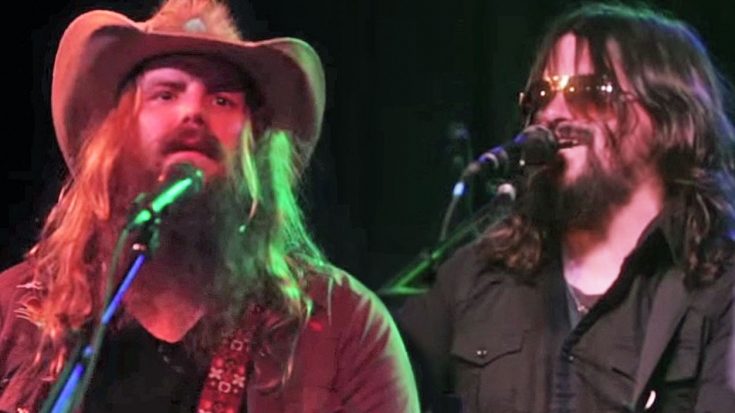 When you hear Chris Stapleton sing, you can hear the influence of the great country outlaws that came before him, including Waylon Jennings.

Chris cites Waylon as one of his earliest influences, and it shows in his singing and songwriting.

On July 9, 2014, Chris stepped up to honor the man who had such a powerful impact on his career. He was one of the scheduled performers at the Full Moon Full Life benefit concert, which was devoted to celebrating Waylon and country singer-songwriter Hank Cochran.

Getting A Little Bit Outlaw

Chris picked one of Waylon’s lesser-known hits to perform at the concert. Called “Don’t You Think This Outlaw Bit’s Done Got Out of Hand,” the tune was written by Waylon and was inspired by some rough times in his life.

It was released as the second single off of his album I’ve Always Been Crazy and peaked at the fifth spot on the charts.

Prior to the concert, Chris explained why he picked the song. “It was never a really big hit or anything, but it was always a cool tune to me because I guess it’s a true story,” he said. “That always appeals to me.”

Keeping Things In The Family

Chris’ performance of the song was also appealing, thanks in large part to the special guest who joined him on stage. That special guest was none other than Shooter Jennings, Waylon’s son with his wife and country singer Jessi Colter.

Shooter stood off to the side as Chris opened the performance, crooning out the lyrics his father wrote decades ago. Finally, Shooter united with Chris on the chorus, and the room exploded with their rowdy outlaw sound.

We couldn’t think of two better or more talented artists to honor a legend such as Waylon. Tune in below to catch Chris and Shooter’s rendition of “Outlaw Bit.” It’s guaranteed to give you goosebumps from the start!