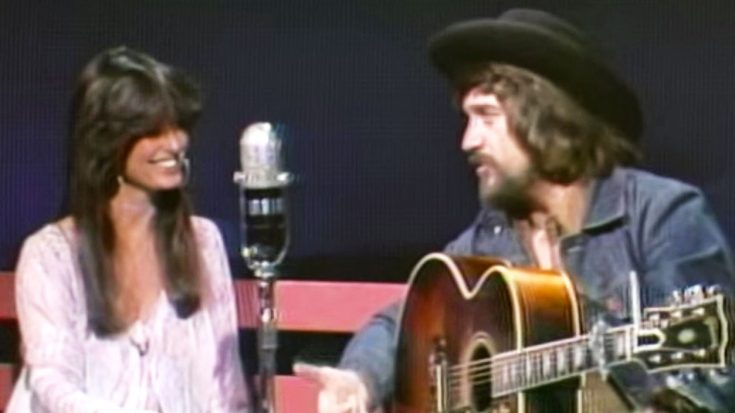 Country music has seen its fair share of power couples over the years, one being Waylon Jennings and Jessi Colter.

Since both were pioneers in the outlaw movement, the two have come to be regarded as the King and Queen of outlaw country, and rightfully so.

Jennings and Colter married in 1969 and had one child together, a son they named Waylon Albright “Shooter” Jennings. They remained married until Jennings passed away in 2002.

The two often worked together, which further cemented their status as a power couple in country music. They recorded duets, both contributed to the widely successful Wanted! The Outlaws compilation album, and Jennings even produced some of Colter’s records.

The two often travelled with one another, and because of this, they ended up appearing on a number of TV shows together.

One of those shows was Cowboy Jack Clement’s TV show, on which Jennings decided to perform one of his more humorous songs, titled “Waymore’s Blues.”

As Jennings later explained after he sang, the first part of the song is about the late country singer Jimmie Rodgers.

That part of the song probably makes the most logical sense, but it gets more ridiculous as it continues. At one point, Jennings resorts to spelling out words, including the word “dog” three times.

Colter was right by her husband’s side as he sang, and could be seen smiling and laughing throughout the song. Once he wrapped things up, he told her that he sang “Waymore’s Blues” as a joke to author and songwriter Shel Silverstein because he thought it didn’t make any sense.

“Is that right?” Colter questioned while shooting him a flirtatious smile.

That sparked a bunch of banter between the couple, as Colter asked her husband about the song.

“You didn’t think it made any sense when you wrote it?” she asked him.

Clearly amused, Colter responded, saying, “Honey that’s not the way you do it. You don’t say that it has a concept after you’ve finished it.”

Taking a puff of his cigarette, Jennings realized he had been defeated.”It was a good song alright,” he said.

You can watch the couple’s full conversation in the clip below. If you need something to make you smile, this video should do the trick. They were so cute together!