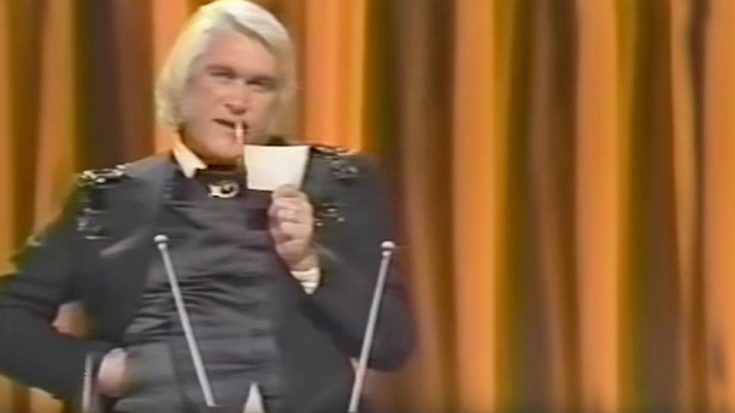 The CMA Awards in 1975 went down in history. Not because of the incredible performances or the amazing awards that were given out, but because of Charlie Rich.

Charlie Rich will probably best be remembered for burning the envelope that named John Denver CMA Entertainer of the Year than any song, which is really a shame. pic.twitter.com/rUOHkLcCB9

He had one of, if not the most, infamous moments in country music history while presenting the CMA Entertainer of the Year award. He won the award in 1974 and was telling the audience how the nominees were “suffering” just like he was the last year, waiting in anticipation.

Up for the award were John Denver, Waylon Jennings, Loretta Lynn, Ronnie Milsap, and Conway Twitty. Denver was more of a pop-country artist, unlike his classic country competitors, and some people didn’t like that he was up for the coveted Entertainer of the Year award.

Rich slowly and awkwardly announced the nominees, during which, he asked Loretta Lynn if she wanted to, “go out tonight.” He ripped open the results envelope, saw the winner’s name, reached into his pocket for a lighter, and lit the card on fire.

A few moments later, he announced that John Denver won the award.

There are speculations that his unusual behavior was caused by the combination of pain medication and gin, while some think he was just trying to get more attention, but no one will ever really know.

Whatever your opinion is on this, there is no doubt about it that this was and still is one of the most infamous moments in country music history!

Watch the video below to see for yourself.