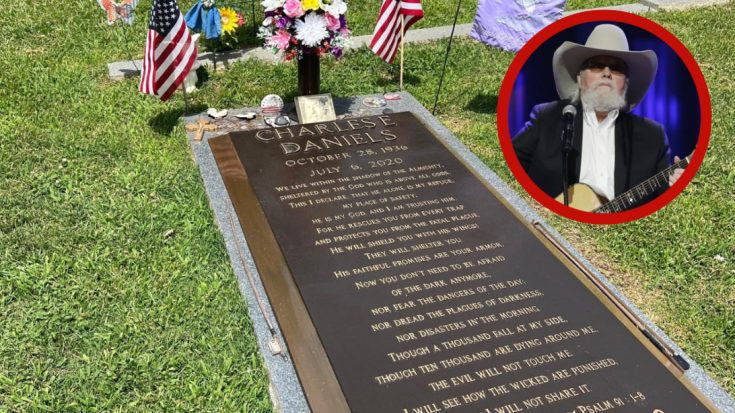 It’s been nearly two years since Country Music Hall of Famer Charlie Daniels died at the age of 83. Fans often visit the late musician’s burial place, but future visitors will likely notice that security measures are being taken to protect the integrity of Charlie Daniels’ final resting place.

In a post made to social media, Daniels’ team shared that his grave marker had been vandalized. According to the post, a visitor stole a dogwood sapling and watering bag over the weekend. In addition, a military ID was glued to the marble marker a few months ago.

In an effort to combat vandalism at the site, police will be patrolling more in the area and video surveillance will be installed.

“Thanks to someone stealing a dogwood sapling & watering bag this weekend (seriously!) & someone gluing a spouse’s military ID on the marble of Charlie’s marker a few months ago, MJPD will be increasing patrols near his grave & video surveillance will soon be installed,” the post read.

A post shared by The Charlie Daniels Band (@thecharliedanielsband)

Charlie Daniels died on July 6, 2020, after suffering a hemorrhagic stroke. In an interview with Taste of Country, Daniels’ son recalled his father’s final days.

Daniels Jr. shared that Charlie’s wife Hazel called him early on the morning of July 6 “and said that I needed to get up to their house right now, that Dad was sick.” Thinking that his father may have contracted the coronavirus, Daniels Jr. was surprised to find “Mom and Dad on the upstairs porch and Dad was slumped over in his chair.”

The “Devil Went Down To Georgia” singer was taken to the hospital where his condition rapidly declined, and he passed away a few short hours later.

“I have no doubt that at 9:52AM on Monday morning on July 6, Dad heard, ‘Well done, my good and faithful servant,'” Daniels Jr. said of his dad who was a devout Christian. “I know that I will see him again.”

Charlie Daniels was laid to rest near his home in Mount Juliet, Tennessee, and a grave marker that included one of his favorite scriptures, Psalm 91:1-8, was installed a few months later.