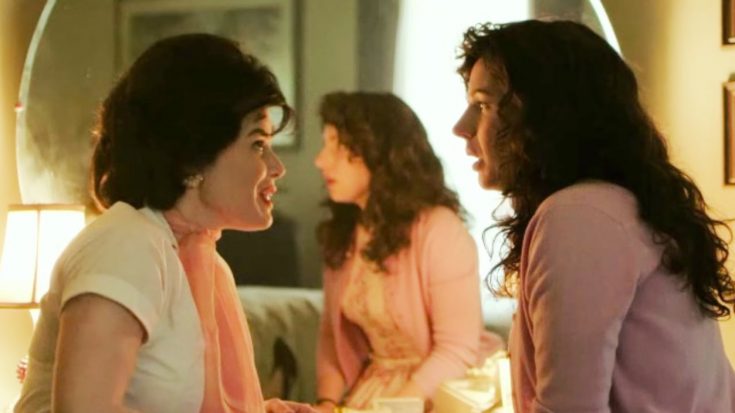 For some time now, we have known about an upcoming film that will focus on the friendship between two country music icons…Patsy Cline and Loretta Lynn.

Just in case you were unaware, Cline and Lynn shared a strong friendship that started after Lynn sang one of Cline’s songs upon hearing she had been hospitalized following a car accident. Once Cline recovered, she served as a mentor to Lynn, and helped guide her through the early stage of her career.

So when Cline passed away in a plane crash in 1963, Lynn was understandably devastated. Years later, she named one of her twin daughters “Patsy” in honor of her beloved friend.

Lynn and Cline’s friendship was famously portrayed in the biopic Coal Miner’s Daughter, but was more of a footnote in a larger story. Now, a whole film is being dedicated solely to the two singers’ friendship, and it’s appropriately titled Patsy & Loretta.

The Lifetime film’s title roles are portrayed by Broadway icons Megan Hilty (as Cline) and Jessie Mueller (as Lynn). Fans got a first glance at the two stars in costume when the official movie poster was released in June.

At last, now you get to see Hilty and Mueller in action as Cline and Lynn, because the brand-new trailer for the movie is here!

Released on Wednesday (July 24), the trailer for Patsy & Loretta shows how the friendship between the two icons began. It also shows them bonding over shared trials and tribulations, including marital troubles.

The clip also features musical numbers, giving you the first chance to hear the actresses sing as Cline and Lynn.

Cline sadly isn’t here to offer her input on the film, but her daughter, Julie Fudge, did co-produce it alongside Lynn’s daughter Patsy Lynn Russell. So you can bet that the film and its trailer also has Lynn’s seal of approval!

The legendary singer, now 87, posted the trailer on her Facebook page and wrote about the special relationship she shared with Cline. “I sure loved Patsy,” she wrote. “It broke my heart when we lost her. We always had lots of fun together.”

I sure loved Patsy. It broke my heart when we lost her. We always had lots of fun together. This movie is coming out this Fall. https://youtu.be/NH0Xtp_Fwvg

If Lynn approves of the movie, then you know it has to be good! Go ahead and check out its official trailer below.

Patsy & Loretta is set to debut on Lifetime some time in the fall, so be on the lookout for it.