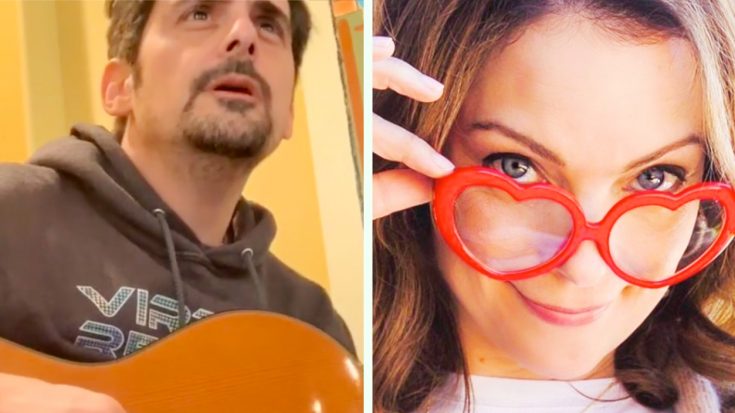 How Brad Met His “Miracle”

Brad Paisley and his wife, Kimberly Williams-Paisley, have a love story like no other.

The first time Brad ever laid eyes on his new wife was while he was at the movie theater…with his then-girlfriend. But it’s not what it sounds like. Kimberly actually starred in the movie that Brad and his girlfriend went to see, titled Father of the Bride.

Kimberly Williams-Paisley looks back at Father of the Bride: https://t.co/hFjBGAuuWY pic.twitter.com/p1Zw5Jyyia

Brad couldn’t explain why, but he instantly felt drawn to the brunette beauty he watched on the silver screen that day. By the time the Father of the Bride sequel came out four years later, Brad was single, and went to watch the film by himself.

Once again, he felt an instant draw to Kimberly.

“He swears, it had never happened before, he woke up one day and decided he wanted to call me,” Kimberly said during a 2015 interview on the Meredith Vieria Show.

Kimberly agreed to go out on a date with Brad, and the two quickly fell in love. They were engaged after only eight months of dating and married on March 15, 2003. Their first child, son “Huck,” was born in 2007, and their second son, Jasper, was born in 2009.

Fans have been able to get to know Kimberly well through the years, as she has appeared in a number of Brad’s music videos. Her latest appearance was when she starred in his rib-tickling video for “Last Time for Everything,” in which she plays a gum-chomping gal.

Kimberly also appeared in the music video for one of Brad’s most romantic songs, “Little Moments.” It’s a song that Brad says she inspired, especially the opening lines when he talks about his lady love backing his truck into something and saying a choice word after she did.

A New Song To Tug At Your Heart

Even after all these years, Kimberly continues to inspire Brad’s music. Most recently, she inspired him to write a song titled “My Miracle,” which he shared a snippet of to celebrate International Women’s Day.

Brad shared the song on social media, asking his fans “Who is your miracle? In honor of #internationalwomensday -here’s a lil’ song for mine…”

The video shows a casually dressed Brad, acoustic guitar in hand, as he tenderly sings the new song he wrote for his wife. While the entire song will tug at your heart, no line will give you deeper chills than the one when he sings, “How could I not have faith in the God that created her?”

Who is your miracle? In honor of #internationalwomensday -here’s a lil’ song for mine…#mymiracle @kimberlywilliamspaisley

That’s some powerful stuff right there! And it just goes to show how powerful Brad’s love for Kimberly is.

You can listen to Brad’s full rendition of his song “My Miracle” by tuning in to the clip below.