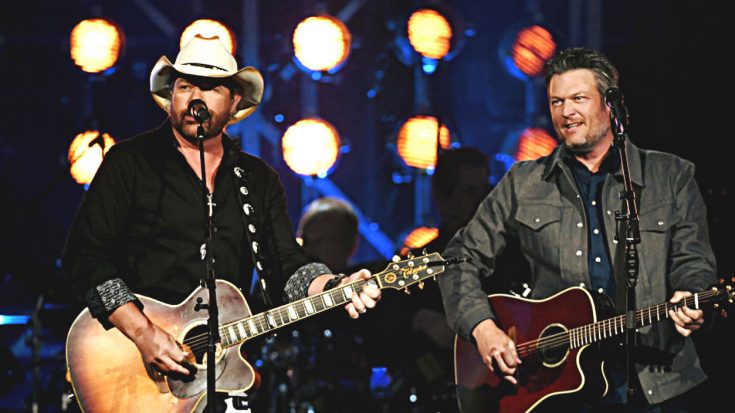 For the first time in years, Blake Shelton was given a performance slot at the 2018 ACM Awards. After his involvement was announced, fans started wondering which song he’d perform.

The obvious choice seemed to be his then-current single “I Lived It.” Of course, it also made sense for him to perform “I’ll Name the Dogs,” which was nominated for an award.

But although Shelton did sing “I Lived It,” he had another song on his plate as well. It would have been near impossible for anyone to guess what Shelton was going to sing, or who he’d sing it with.

Before the ceremony, the ACM revealed its plans to have special “ACM Throwback” performances. As stated in a press release, these performances would pair current stars with country icons to celebrate the 25th anniversary of songs released in 1993.

It was thrilling to see Shelton’s name in the lineup of artists that would be participating in the throwback performances. It was even more thrilling to see that he’d be joining Toby Keith to sing his breakout hit, “Should’ve Been a Cowboy.”

The song is one that Keith was celebrating himself that year. He named his 2018 tour The Should’ve Been A Cowboy Tour XXV to mark 25 years since its release.

The two had the entire crowd on their feet during their performance at the ACM Awards, and many of the other artists could be seen singing along. Based on their response once Keith and Shelton wrapped things up, their collaboration was on of the best things to happen on the stage that night!

There’s no denying it. Shelton and Keith’s ACM Awards performance of “Should’ve Been a Cowboy” was downright epic. Enjoy it over and over again by checking it out in the video below!