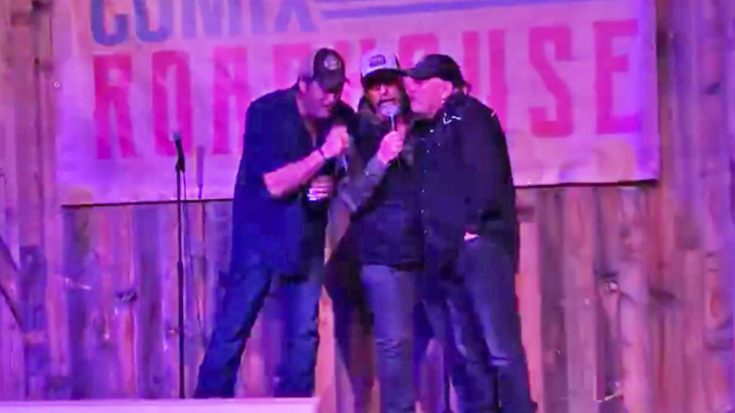 Their tour may be coming to an end but these talented men aren’t ready to stop putting on a show together!

Blake Shelton just finished up the final days of his Friends and Heroes Tour alongside some pretty incredible artists. The “Honey Bee” singer brought along the Bellamy Brothers, John Anderson, Trace Adkins, and Lauren Alaina to help him put on one hell of a show. There were several highlights from the tour that stretched from Valentine’s Day to March 23, including when Blake joined the brothers on stage for their 1979 hit, “If I Said You Have a Beautiful Body Would You Hold It Against Me.”

Night 2 in Kansas City, Mo. Thank you Blake Shelton. And thank you to all the fans for singing along and sending us these videos. #FriendsandHeroes2019Tour #Thankful

Posted by The Bellamy Brothers on Friday, February 15, 2019

While the artists had a blast touring together, it was one of the last nights of the tour where they really celebrated. After their show at Mohegan Sun Resort & Casino in Uncasville, Connecticut, Shelton and the brothers took their talents to a private karaoke bar for some fun. Shelton takes the stage alongside his tour buddies as they prepare to sing their 1976 classic, “For All The Wrong Reasons.”

36 years ago The Bellamy Brothers topped the Billboard country singles chart with "For All The Wrong Reasons." #MusicIsLife

The trio of country singers stands in a circle facing each other as they beautifully harmonize the beginning verses. Shelton can’t keep a smile off his face as he hypes up the brothers to sing their solos. The Bellamy Brothers even give Shelton his own solo as he takes care of the second verse! Although no one can sing it quite like the brothers themselves, Blake was a great addition!

Who else thinks the Bellamy Brothers should add a third member to their band?!

Check out the video below.

A little karaoke with Blake Shelton last night after the show in Uncasville, Connecticut. #forallthewrongreasons #friendsandheroes2019tour