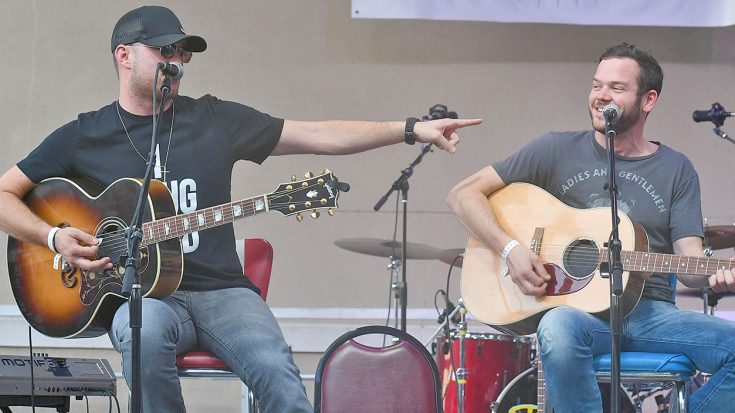 Imagine that you’re jamming with your bandmate when your longtime hero walks in and asks to sing a song together. Well, that’s what happened to country duo Walker McGuire one summer!

‪"Boy can't you see that you're part of the planet. No less or more than the sea or the granite." #EarthDay #Geronimo‬?: Steven Bradley

Billy Ray Cyrus was walking down a hallway in Los Angeles, when he heard two voices singing together, and poked his head in to see who it was. Famous for their chilling harmonies on songs like “Til Tomorrow,” “Lost,” “Best Kinda Bad,” and “18 Forever,” Walker McGuire is a burgeoning duo act that is signed to Wheelhouse Records, an imprint of Broken Bow Records, alongside fellow artists Trace Adkins, Runaway June, and Granger Smith.

The duo admitted that they grew up in the “Achy Breaky” generation of country music, so when Cyrus stopped by asking to jam together, they jumped at the chance!

“[‘Achy Breaky Heart’] was probably the first song I remember hearing, and I still love that song,” Johnny McGuire told Cyrus before they busted out an impromptu performance of the 1992 smash-hit.

I want y’all to have a great weekend! Thanks for sharin' this #throwback pic, @brclorrainemc

Jordan Walker took the lead on vocals, with his bandmate singing harmonies. Cyrus admired what he was hearing for a while before he jumped in during the chorus. After singing a couple verses and the chorus, the three singers burst into joyful laughter, talking about how much fun they just had!

We can’t imagine what this moment meant for the young singers, who have looked up to Cyrus almost their whole lives. They posted the video on their Facebook page with the caption, “We just played ‘Achy Breaky Heart’ with Billy Ray Cyrus…Dreams really do come true. Keep believing, kids. Unforgettable.”

Watch their impromptu collaboration in the video below.