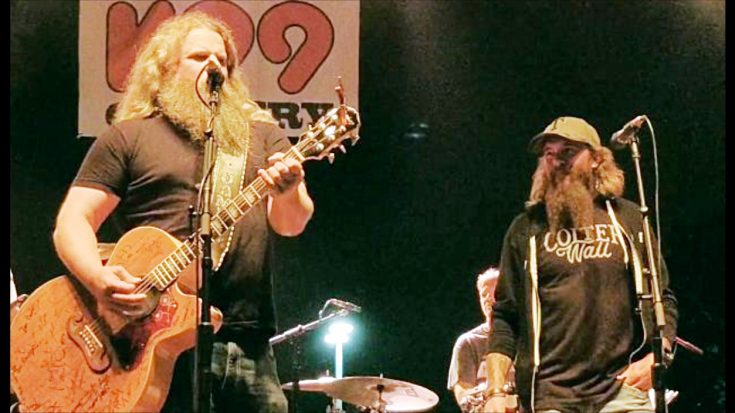 Visting Choctaw, Mississippi – this unforgettable country singer and one of his closest friends dusted off this 80s hit for a performance that nobody will soon forget!

A flat-out flashback, Jamey Johnson, and fellow singer Cody Jinks unveiled their choice in surprise songs to the crowd and received an overwhelming response back – especially when the audience figured out what they were about to sing.

#FlashbackFriday
Loretta Lynn as a guest-star on The Dukes of Hazzard! Check out this photo of her on set with Tom and @J_R_Schneider. Who was your favorite guest star? Comment below! ?

“I don’t even have to ask – I know you know this one,” Johnson said with a chuckle as he strummed his guitar. “I don’t think we’ve ever done this with the band! They’ve never done this…in fact, I don’t think anybody’s done this song since about 1980!”

With just the first few plucks of his guitar strings, everyone caught onto the song he was talking about and excitement washed across the entire crowd.

Singing “Good Ol’ Boys” from television’s Dukes Of Hazzard, both Johnson and Jinks brought this song back to the forefront of everyone’s mind in a very special way.

The song, which was originally written and performed by none other than the legendary Waylon Jennings, was released as a single and had a separate version used for the TV show with varying instrumental spots and chorus repeats.

1975 Singer/songwriter Jamey Johnson is born in Enterprise, Alabama. The author of Trace Adkins' "Honky Tonk Badonkadonk" & George Strait's "Give It Away," he breaks through as an artist with the 2008 album "That Lonesome Song" & the hit “In Color”https://t.co/P55oSdoQsc pic.twitter.com/1FjFisZVaL

How many of y’all remember hearing this on the radio?

Check out Jamey Johnson and Cody Jink’s masterful rendition below and tell us how you think they did.