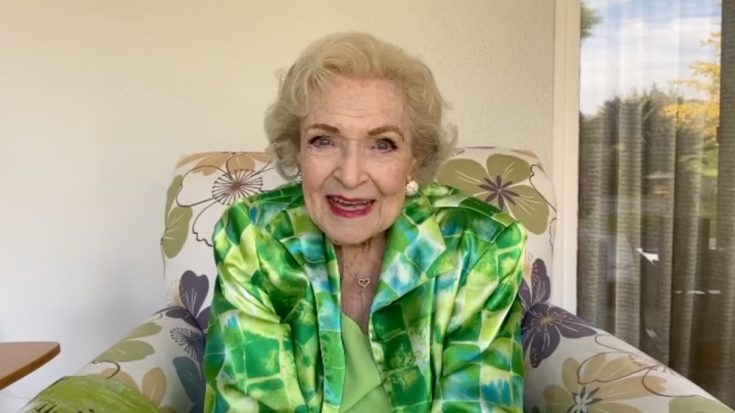 2021 came to a sad end with the death of beloved actress Betty White. Days before her death, White filmed a brief video of thanks for her fans and it was just been released.

The “Golden Girls” star died at the age of 99 on December 31. Just 11 days prior, White sat down to film a message to fans that was set to air as part of her 100th birthday celebration on January 17, 2022. The 14-second clip, shared to White’s Instagram about by her assistant, shows the actress looking radiant in green as she says, “I just want to thank you all for your love and support over the years. Thank you so much, and…stick around!”

“She could never have imagined such an outpouring of love and would have be so grateful to everyone. When we recorded her special message to fans who attended the movie, we also recorded one that we had planned to put on social media on her birthday. She was using the occasion of her 100th birthday to celebrate YOU – her fans. She knew how lucky she was; she felt the love, and she never took it for granted. I think it’s appropriate to post today as a thank from Betty and the animals,” the caption read.

Six days after the video was filmed, Betty White suffered a Christmas Day stroke that would ultimately lead her to death. Her death certificate, released shortly after her passing, White died “due to a cerebrovascular incident,” also known as a stroke. A source told PEOPLE “It was a mild stroke.”

Betty White‘s long-time friend and agent Jeff Witjas issued a statement following her death confirming that she “died peacefully in her sleep at her home.”

“Even though Betty was about to be 100, I thought she would live forever,” Witjas said. “I will miss her terribly and so will the animal world that she loved so much. I don’t think Betty ever feared passing because she always wanted to be with her most beloved husband Allen Ludden. She believed she would be with him again.”