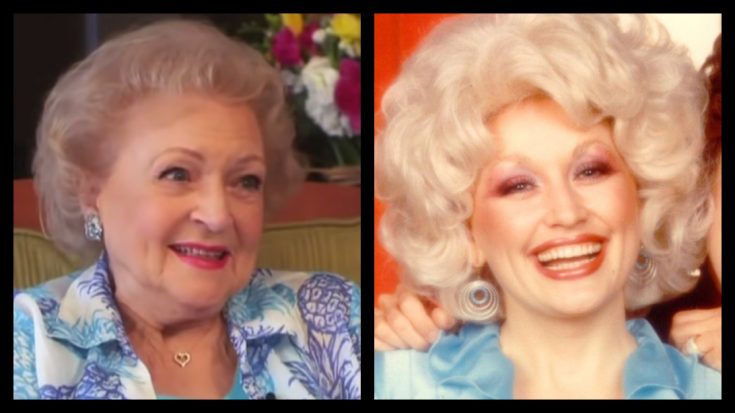 The world is mourning the death of legendary actress Betty White who died Friday morning, December 31, at the age of 99. While we’re all huge fans of the actress, she herself was a fan of country music’s own legend, Dolly Parton.

In a 2010 interview with The Boot, White confessed her love of country music and of Dolly Parton.

“Country music tells stories, and it’s also basic,” Betty said. “It’s the kind of music that reaches right inside of you because it’s simple and it’s direct. I just enjoy it thoroughly. It’s relaxing and nostalgic. It can turn on some lovely memories and sometimes some poignant ones.”

Betty added that Dolly Parton‘s “9 to 5” was among her favorites. “I like Dolly’s whole approach to life with ongoing and uplifting songs. I never met Dolly but everything I ever heard about her she was a great gal to know and you could kind of get it in her music and her voice and her approach to lyrics.”

Another country song favorite of White was “Sixteen Tons” by a man she knew and admired, Tennessee Ernie Ford. “I knew him, and Ernie was a very likable guy, and the power of his voice was amazing!”

Betty White not only loved country music, but once had hopes of pursuing her own career as a singer. White told The Canadian Press in 2012 that her love of music runs deep.

“When I was a youngster, I wanted to be an opera singer, so I took very serious singing lessons.” She added that she only occasionally sang opera when nobody else was around.  Betty became known as a dynamic comedienne and actress but didn’t hesitate to show off her vocal chops every now and then. Hear Betty White sing “Getting to Know You” from The King and I in the video below.