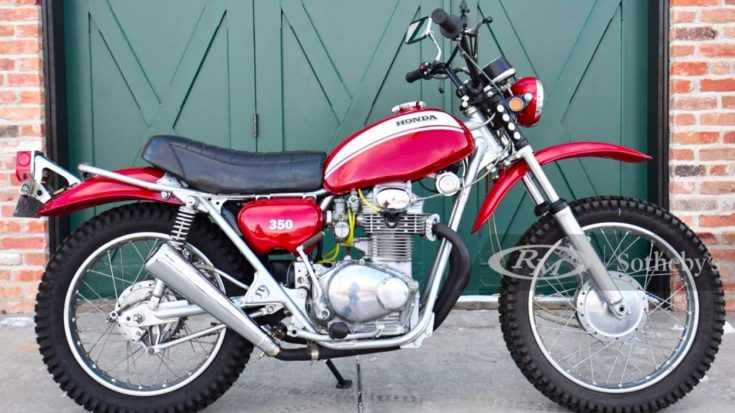 According to RM Sotheby’s Auction, a Honda SL350 motorcycle that used to belong to the Legendary American actor John Wayne was available for purchase on January 27, 2022.

The auction’s website says there were offers coming in at $60,000 – $80,000 from folks who are motorcycle and Americana collectors.

The bike comes with ownership transfer documents that indicate that Wayne purchased the bike from American Honda Motor Co. on 21 December 1971; the buyer’s address listed is for the Newport Beach, California residence where Wayne lived until he died in 1979.

John Wayne once took a photo with the Honda SL350 while he was on the set of the 1971 Western film Big Jake. Fully decked out in his cowboy attire, he was seen in the photo sitting on the bike.

It was said it would have provided an ideal on-set way of transportation for him during his time filming in the deserts of Mexico, where the Big Jake production was filmed.

According to the auction site, “The powerful and reliable 326-cubic-centimeter vertical twin engine and five-speed gearbox of the CB350 was retained, but the new model gained beefier tires and upswept exhausts; by 1970, the SL350 also featured a revised frame and suspension.”

“The result was something more civilized than a dirt bike, yet still eager to tackle unpaved trails—making the SL350 effectively an early example of what we now know as a dual-sport motorcycle,” the site added.

RM Sotheby’s Auction went on to say that the bike was beautifully restored to a very high standard.

According to the auction website, the bike was sold for $30,000, which is shocking because it was initially reported that offers came in at $30,000-$50,000 higher than what it sold for.