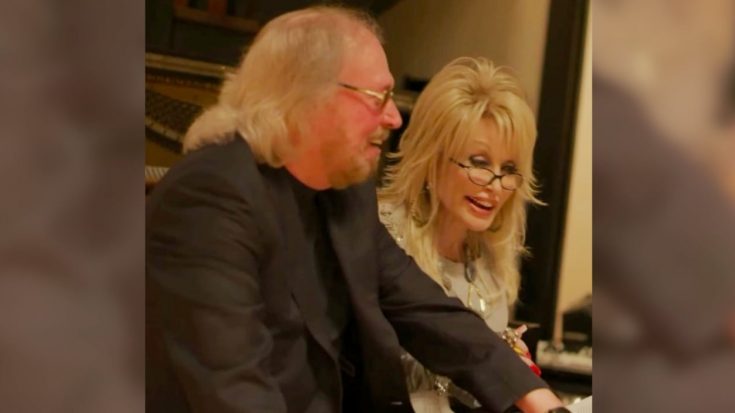 Today, Kenny Rogers and Dolly Parton‘s “Islands in the Stream” is known as one of the greatest country music duets of all time. But if things had gone as originally planned, it never would have been theirs.

But when Barry started working as a producer for Kenny, the “Gambler” singer expressed the desire to record a duet with Dolly. That’s when Barry suggested they record “Islands in the Stream.”

The song was reworked for the duo, who recorded it in May 1983. It was released as a single three months later and became a worldwide hit.

Now, nearly 40 years after “Islands in the Stream” was recorded, Barry and Dolly have collaborated again. The two paired up to rework the Bee Gees’ song “Words” for Barry’s new album, Greenfields: The Gibb Brothers Songbook, Vol. 1.

Barry spoke with Billboard about the new project. He was asked if he had seen Dolly since she recorded “Islands in the Stream” in 1983, and he said he hadn’t.

Describing what it was like to reunite with Dolly after so long, Barry said:

“Dolly was a great thrill, and as incredible as she always is. She’s such a humble person. I just don’t understand how people of that stature remain calm and humble and ready to have a laugh, you know?“

Barry said it was extra meaningful for Dolly to record “Words” in the particular studio they were in, because it was where she had recorded two of her own iconic songs.

“Dolly told me that where she was standing at the microphone is exactly where she stood when she did ‘I Will Always Love You’ and ‘Jolene.’ You know, that’s mind blowing,” Barry said.

Now, Dolly has one more memory connected to that same spot…her recreation of “Words” with her longtime friend Barry. Listen to their collaboration below.

We’re so glad Dolly and Barry got together to work on another project after all these years!