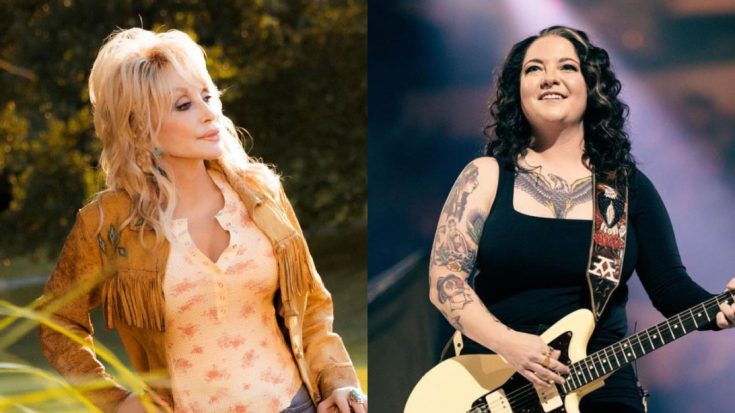 Most country music fans and singers would take advantage of any time they could spend with Dolly Parton. But, Ashley McBryde does the opposite…she walks in the other direction when she sees Dolly coming.

In a recent interview with Audacy’s Rob + Holly, McBryde came clean about why she avoids the country music queen and walks “the other direction” when Dolly’s in her midst.

“I caught her microwave on fire,” McBryde laughed as she confessed that she has avoided Dolly for the last 10 years. “I got this gig….they were remodeling her lake house and my job was to stay there with her niece [who] was my buddy. We were supposed to stay there and let the wallpaper guys in and out and just do that kind of thing.”

“I do take the blame for [the fire] because I’m the one who removed the on-fire microwave out of the house, but it was honestly her niece. She stuck a whole box of bagel bites in there. Like, in the box and then ‘beep,’ there it goes in a freshly wallpapered room.”

McBryde was fired after the fire incident, but Dolly did give the “Girl Goin’ Nowhere” singer a parting gift.

“I lost my job, but Dolly gave me the microwave,” Ashley said. “She knew that I was poor and didn’t have one.”

McBryde added that everything she cooked in the microwave after the fire smelled “like bowling shoes.”

Ashley may avoid Dolly, but she still admires her. In a 2019 interview with Extra, McBryde shared just how influential Dolly has been to her career.

“My favorite thing about her has always been her stage presence. Of course, I read her book when I was younger….the way she spoke in the book is how she speaks on stage. Whatever’s on her mind, she talks to you like you’re in her living room. That really hit home with me. When people ask, ‘Why don’t you get nervous when you talk on stage?’ I’m just doing what Dolly does. I’m just talking to you like you’re in my living room. I owe her a lot.”

Hear Ashley McBryde recount her last Dolly encounter and other embarrassing moments with fellow country stars in the podcast interview below.