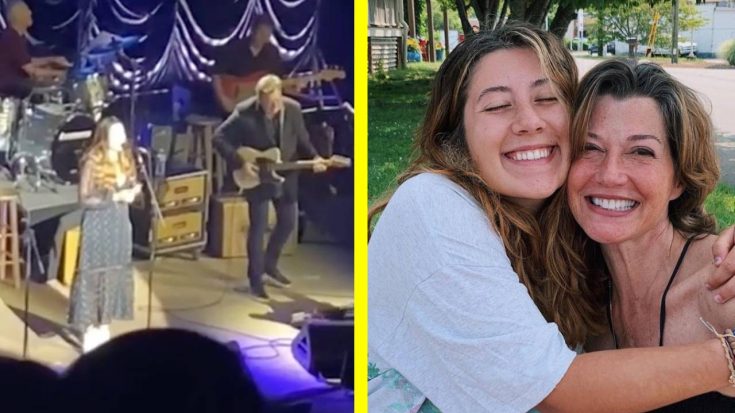 In 2020, Vince Gill won a Grammy Award for a new song he released off his 15th studio album, Okie. Titled “When My Amy Prays,” the song is about his wife, Christian singer Amy Grant.

Some of the moving lyrics include, “All my life I’ve known of Jesus but that connection never came. And when my world was torn to pieces, I still couldn’t call his name. But when my Amy prays, when my Amy prays, that’s when I see his face.”

Not long after Gill won a Grammy for this song, he and his youngest daughter, Corrina, performed “When My Amy Prays” at the TJ Martell Honors Gala. Corrina has the voice of an angel, but seeing as her parents are Vince Gill and Amy Grant, we aren’t surprised!

One week ago, Grant hit a pothole while riding her bicycle in Nashville. The 61-year-old was taken by ambulance to a Nashville area hospital where she was admitted for treatment of “cuts, lacerations and bruises.”

In a post made to social media two days after the crash, Grant’s team shared that she had been released from the hospital. “Doctors have ordered additional recovery time at home for Amy, where she is now resting comfortably,” the statement read.

They also stated that Grant has had to postpone her upcoming August concerts. Those shows have been rescheduled for April and June 2023. Gill also canceled a series of upcoming concerts due to the family emergency. Unfortunately, these shows will not be rescheduled.

Gill returned to the stage for his dates at the Ryman Auditorium beginning on Thursday, August 4th. During his sold-out show, he invited his daughter Corrina to perform “When My Amy Prays” with him. As she stood center stage, Gill accompanied her on guitar and looked extremely proud!

The entire audience must have all gotten choked up when Corrina changed the lyrics to “When My Mama Prays.” We know we did! At some points in the song, Corrina’s voice sounded shaky from all the emotion. You can tell how much she loves her mama!