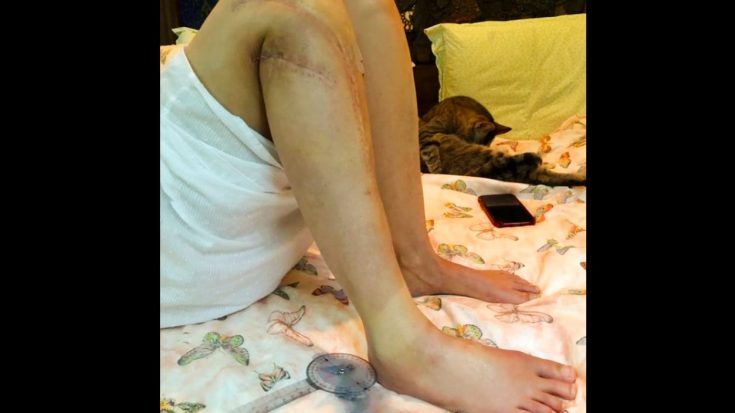 Ashley Judd is feeling optimistic after suffering an injury earlier this year that nearly resulted in the loss of her leg.

In February, Judd was on a trip in Africa to research bonobos, an endangered species of ape. While in the forest, she fell. It took 55 hours for Judd to receive medical attention.

“Friends. Without my Congolese brothers and sisters, my internal bleeding would have likely killed me, and I would have lost my leg,” Judd wrote on social media alongside some photos of her journey from the rainforest to the hospital. “I wake up weeping in gratitude, deeply moved by each person who contributed something life giving and spirit salving during my grueling 55 hour odyssey.”

Judd’s leg was “broken in four places and had nerve damage.”

After receiving treatment at a hospital in South Africa, Ashley came back to the U.S. in late February. She received continued care back in the States, where she underwent a seven-hour surgery to repair the injured bones in her leg.

Now, over two months after she injured herself, Judd is slowly recovering.

The 53-year-old actress shared an update on her condition on Saturday (April 24). She posted a slideshow containing photos of inspirational quotes alongside pictures (and a video) of her and her injured leg.

Judd spoke about how she remembers what it felt like to finally be able to sleep through the night again. She also described some heel slide exercises she has been doing, and how she recently reached a major benchmark.

“With the kind of injury I (& many others) have, we speak of degrees,” Judd said. “In the video, 109 degrees was an outrageous dream, & trying to reach it was agony. I did 60 of those heel slides a day. I sobbed through them. I made it because of the loving exhortation and validation of my many friends. Yesterday, I effortlessly reached the benchmark of 130 degrees.”

Judd said her four fractures are healing, but her nerve damage will take “at least a year” to get better. She is looking forward to June, when she will finally be able to “walk with a brace and a cane.”

Even though Judd still faces a long road to a full recovery, she is hopeful she’ll one day be able to resume her adventures. She wants to return to Africa, and also has ambitions to visit South America.

You can read Judd’s full update in the post below. We’ll be praying for her continued healing!