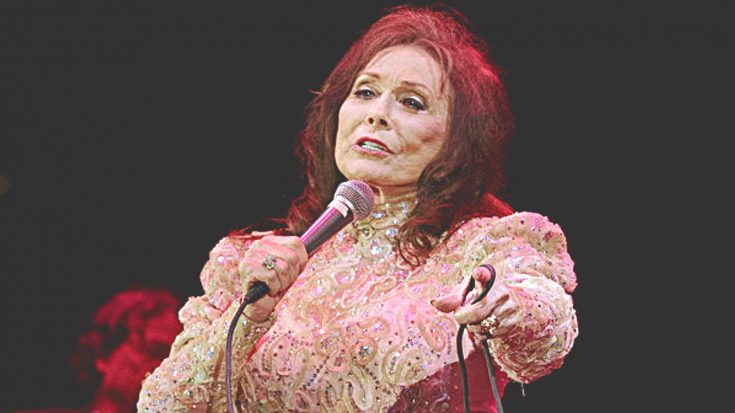 Loretta Lynn‘s family experienced quite a scare on Thursday (May 31).

In case you didn’t know, Loretta owns a ranch in Hurricane Mills, Tennessee. Loretta and some of her family members live on the property, but it isn’t just a private estate.

Loretta has opened up a large part of her ranch to the public, and it is used as a campground and event center. It also has a museum, boutique, and multiple shops.

People often retreat to Loretta’s ranch for a little rest and relaxation out in the country. But on Thursday, things on the ranch were far from peaceful.

A little after 1:00 PM, News Channel 5 out of Nashville tweeted the breaking news that there was a heavy police response at the Loretta Lynn Campground. According to the tweet and an accompanying report, the police were looking for an armed suspect on the loose in the area.

BREAKING: There is a heavy police response at Loretta Lynn Campground in Humphreys County. An armed suspect is on the run. Sources tell us this is NOT related to the search for Steven Wiggins. pic.twitter.com/19DCzU1Wh7

As the tweet noted, the search was not related to the massive manhunt for Steven Wiggins, the man who has been accused of murdering Dickson County Sargent Daniel Baker. He was still on the run at the time, but has since been captured.

In a later tweet, News Channel 5 said the Tennessee Bureau of Investigation had confirmed that she search at the Loretta Lynn Campground had no connection to the other search.

UPDATE: TBI says this is not related to the search for Steven Wiggins. https://t.co/GIbKL0rQh0

Loretta’s granddaughter, Tayla, who is also a singer, lives on the Hurricane Mills property and was home at the time of the police’s search. She also shared News Channel 5‘s tweet, and provided her own update on the situation.

“We are all locked up and safe but this is certainly scary,” she wrote.

We are all locked up and safe but this is certainly scary ?? #prayersforpolice

Since then, neither Tayla nor News Channel 5 has provided any sort of any update about the search. But Tayla made a post to Instagram on Friday (May 1), so we’re assuming that everyone is safe.

A scary experience indeed! We’re so glad that no one in the Lynn family was harmed.