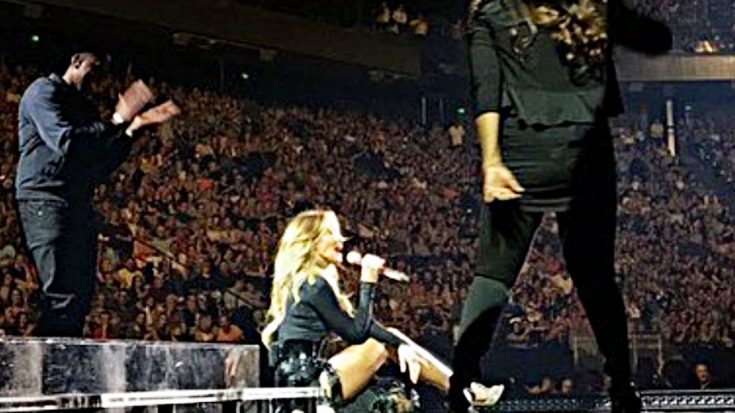 During a tour stop on their top-selling Soul2Soul World Tour, Faith Hill took a seat on the concert stage and demanded applause before she would stand up – saying “I want some respect!”

According to videos and photos on social media (along with a series of tweets), it appears that their stopover in Lexington, Kentucky had some less-than-excited fans. It was such an apparent part of the crowd’s vibe that Faith took matters into her own hands and sat down on stage in the middle of her set.

Tonight Faith sat down on the stage because people were lame and sitting during her set, and she said she wasn’t standing up until everyone else got up!! What a queen!! ????

One Twitter fan account posted a variety of descriptions and photos of the situation. According to the user, folks had been sitting a ton and not getting into the show they paid to come see – so Faith sat down on stage after demanding respect from the audience.

Homegirl went OFF on the crowd tonight because they weren’t standing during her set. I stan a queen #faithhill #soul2soul

@FaithHill sitting down tonight and demanding the RESPECT she DESERVES, but seriously who would sit at a Tim & Faith concert especially when the Queen is performing?!?????❤️#Soul2Soul pic.twitter.com/CBzzsvnmYW

Fans took to Twitter after the video was published and people praised Faith’s demand for respect after putting so much energy and effort into her concert and music alongside husband Tim McGraw.

Y’all need to stop sleeping on Faith Hill. That woman is a damn icon and a powerhouse of a voice. Give her the respect and praise she deserves.

Thank you and goodnight.

According to several people at the concert who commented on the video of Faith sitting down on stage and demanding respect from the audience, the video clearly doesn’t show the entire story – but it’s not too far off of reality.

Well, that's not the entire story, but she did def demand respect. The whole place was on their feet except ur usual few ppl. It was actually one of the best venues and crowds out of all 14 I've done. But that shit was funny.

We aren’t sure exactly what happened to have her demand respect from the audience, but there’s no doubt about it – she’s worked hard and definitely deserves applause and respect for the vast amount of good country music she’s created over the years.

Watch the video below and tell us what you think.