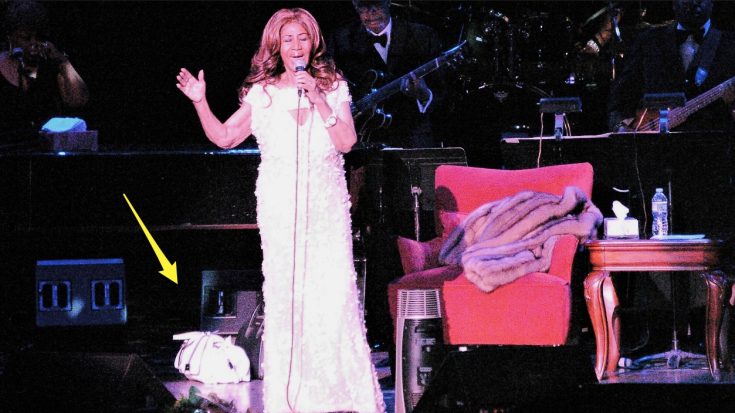 For decades filled with performances, The Queen of Soul was known for one seemingly-odd trait…but there was a secret truth behind her quirkiness.

Aretha Franklin, one of the most legendary performers of all time, had not only earned a reputation for her iconic hits, instant classics, and profound vocal skills – but she also became known for something else: bringing her purse on stage with her.

Franklin passed away on Thursday, August 15th, 2018 after battling an advanced form of pancreatic cancer for years. She kept her health battle private for quite some time and even continued performing up until 2017.

Each time Franklin stepped on stage, folks noticed her incredible stage presence: a powerful vibe that filled the room. But, folks also noticed something else – she usually could be seen performing with her purse by her side.

Most important question of the day: What the hell was Aretha always carrying around in her giant purse? God, I love her. #ArethaFranklin #GodBless pic.twitter.com/2ZvzlT5Wzk

Here's why Aretha Franklin always carried her purse on stage: PBS   * Aretha Franklin, the Queen of Soul, passed away at 76 this week and had a policy of being paid in cash before her performances. * Franklin was never far from her handbag, which often joined her on stage for… pic.twitter.com/CCONf4MTCP

The reason Franklin kept her purse with her at all times is because she demanded she be paid in cash before every single performance. Yep, you heard that right – her purse was bulging with hundreds of thousands of dollars.

If the purse wasn’t on her person, it was within eye-shot on the piano or at her feet. There were a few times she entrusted it to her security personnel – but more often than not, you’d spot her with it very close by.

“The purse thing has a long history: she keeps her purse with her at all times,” the director of the Kennedy Center Honors told the New York Times. “She’s got her money, she’s ready to move, to go wherever she needs to be. How many times do you have to leave your purse in the dressing room and have it go missing before you say, ‘I worked hard for this money — I’m going to put my purse right here where I can see it?'”

In a 2010 contract that was published by The Smoking Gun, it was revealed that Franklin’s requirement for promoters was that they pay her $25,000 cash. The remainder could be paid via check, but she required the cash portion to be paid up-front before the show.

Even in her final recorded performance at Elton Jon’s AIDS Foundation in November 2017, you can see her silver purse on the piano behind her.

Watch her final public performance below.