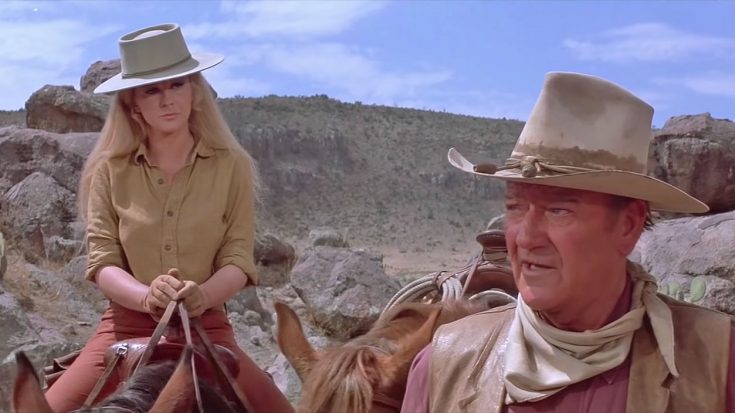 April 28, 2021, marks legendary actress Ann-Margret’s eightieth birthday. She recently spoke about her experience working with John Wayne in one of his movies.

The singer, dancer, and performer was featured in a number of films during the early 1960s, including Bye Bye Birdie and Made in Paris. Her most popular film featured her incredible dancing in 1964 hit Viva Las Vegas alongside Elvis Presley, with whom she shared a passionate love affair. Shortly after working with Presley, she had the incredible opportunity to join wild west star John Wayne in his 1973 movie The Train Robbers.

In the movie, three Civil War veterans (John Wayne, Rod Taylor, Ben Johnson) team up with a train robber’s widow (Ann-Margret) to recover half-million dollars in hidden gold. The widow wants to clear her husband’s name, while the men helping her want the $50,000 reward. They have to figure out how to do both while contending with the dead man’s ex-partners.

The Train Robbers marked Margret’s first lead role. In a recent interview with Fox News, she gave insight into how Wayne treated her and spoke highly of the actor, claiming he was “welcoming and gentle.”

“I didn’t know what to expect. But when he hugged me, it’s like the world was hugging me. He was so big and wide with that booming voice. We were shooting in Durango, Mexico and my parents came down to visit me. He was so great with my parents. So absolutely welcoming and gentle with them. And anybody who was great to my parents was on a throne in my eyes.”

“I was friends with him forever. He was never [pretentious]. He had so many friends and every single person loved him.”

Watch the trailer for The Train Robbers below.