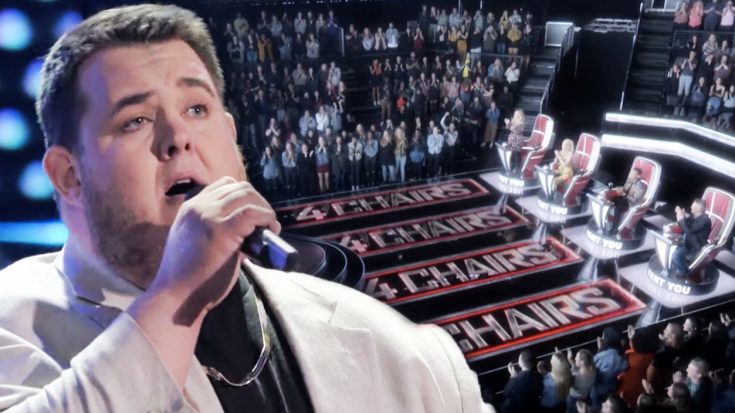 In 2015, Chris Stapleton and Justin Timberlake took the CMA Award by storm with their incredible mashup of Chris’ version of the George Jones classic “Tennessee Whiskey” and Justin’s “Drink You Away.”

Since then, Chris’s soulful version of “Tennessee Whiskey” became one of the most popular songs in the country and continues to be a staple for singers of all genres to this day. Shane Q, who is appearing on Season 17 of The Voice proved this to be true in his Blind Audition.

After singing just five words, all four judges eyes widened, and Gwen Stefani looked at Blake Shelton and said, “Wow,” while pointing at him, knowing the country singer would want this singer on his team.

It didn’t take long for Stefani to turn her chair first, followed by Kelly Clarkson. Before anyone else could turn around, Shane delivered a falsetto riff, which made Gwen’s jaw drop, and Kelly to make…well, the face in the GIF below.

After that riff, Blake pressed his button and before you knew it, so did John Legend, giving Shane the coveted – and rare – 4-chair turn.

The time came for all four coaches to beg for him to join their team and as you could imagine, they went all out. Blake snorted his drink into his nose, he loudly read an article on his phone, Kelly insulted him, and Gwen confused San Francisco for Shane’s hometown of Sacramento.

Shane ended up choosing Kelly Clarkson, much to the dismay of Blake!

Wow! I’m on @NBCTheVoice !!!! Unreal! And I picked Kelly!!!! #teamkelly!!!! thank you all for the love and kind words! pic.twitter.com/5eoGyqLcIT

Watch the audition below.