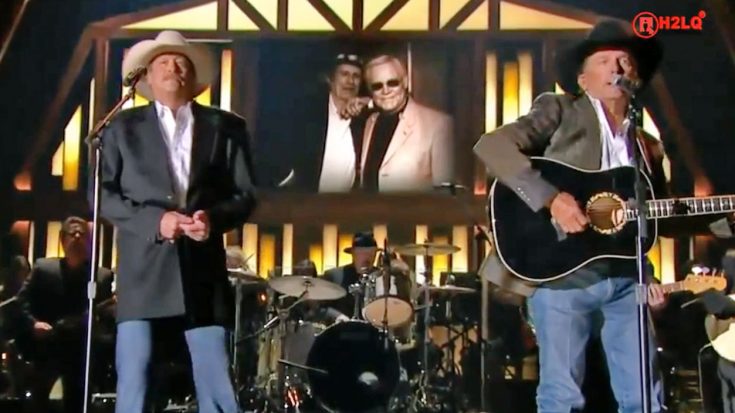 George Jones’ song “He Stopped Loving Her Today” is undoubtedly one of the greatest country songs ever recorded. It gathered awards – including CMA Awards for Song Of The Year, and a Grammy for Best Male Vocal Performance. It was released in April 1980 as the lead single from the album I Am What I Am.

In 2009, it was selected for the National Recording Registry at the Library of Congress and has been named in several surveys as the greatest country song of all time.

For artists like Alan Jackson, Jones was incredibly influential in his career and music. Jackson mentions the Possum in his hit tracks “Don’t Rock the Jukebox” and “Murder on Music Row.” He even performed “He Stopped Loving Her Today” at Jones’ funeral.

One incredible, and emotional performance of “He Stopped Loving Her Today” was when George Strait joined Jackson at the 2013 CMA Awards.

Strait strummed his guitar alongside Jackson and they harmonized together as images of Jones formed a slideshow on the screen behind them.

Brad Paisley introduced the two of them by saying that he was proud to have called George a friend and that we’d have lost the Possum a lot sooner if not for his wife Nancy.

Watch the emotional performance below.