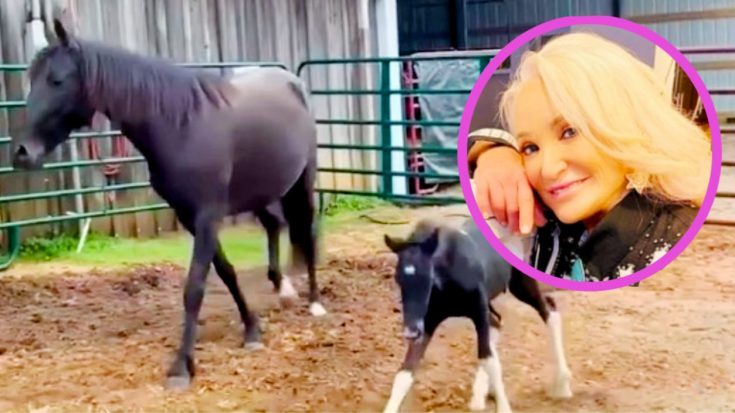 Tanya Tucker loves horses. If this was something fans didn’t know about her before, they learned it after she released her 2019 Grammy-winning album, While I’m Livin‘.

The album cover features a photo of Tucker on a rearing horse. “It speaks volumes as far as ‘Now, that’s an outlaw on that horse rearing up’ and that is me on that horse,'” she told radio station 102.7 Coyote Country.

Horses were also featured in Tucker’s music videos for “The Wheels of Laredo” and “Bring My Flowers Now.” The former video ended with a message that read:

“Tanya would like everyone to know that the humane treatment of horses in Tennessee is all of our responsibility.” She then asked fans to support to a horse rescue called Redemption Road Rescue.

Now, nearly two years after Tucker released the video for “The Wheels of Laredo,” she has rescued two horses from Redemption Road.

On Wednesday (April 14), Tucker posted a video on Instagram of a mare and colt she just adopted from the rescue. “Look at my new babies!!! Momma and son,” she wrote in the video’s caption.

After sharing that she adopted the mother and son duo from Redemption Road, Tucker called on her fans for help. “What should I name the colt and the momma!!???” she asked.

Tucker said she already has a horse named after Loretta Lynn, so the name “Loretta” is out of the running. But she’s willing to hear other suggestions!

Fans filled the comments with names for the horses. One follower told Tanya she should name the colt “Conway Twitty” since she already has a horse named Loretta. Someone else suggested the name “Brandi” for the mama in honor of Tucker’s While I’m Livin‘ producer, Brandi Carlile. Another pair of country singer names that popped up in the comments was “Dolly & Cash.”

Look below to watch the video of Tucker’s new horses. Do you have any names in mind for these two beautiful animals?