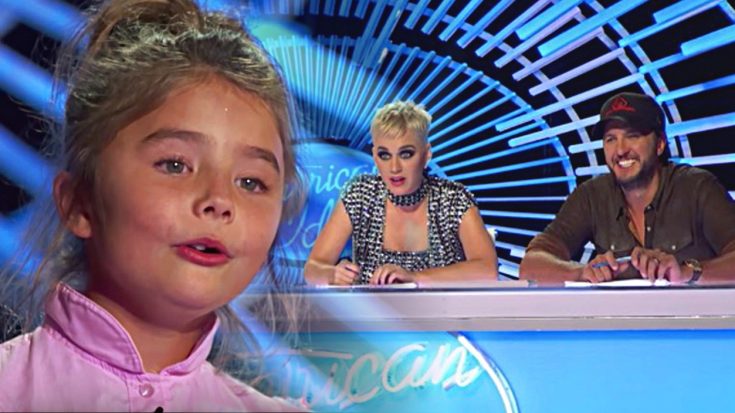 In an audition that aired in the first season of the rebooted American Idol, the judges were introduced to sisters Layla and Dyxie Spring from Kentucky. The two girls were country as could be, and instantly won over the judges with their cute outfits and Southern charm.

While Layla was the one auditioning, she told the judges that she’d actually like to let Dyxie sing first. Even though Dyxie is only seven, and therefore too young to compete, the judges knew they couldn’t say no!

The country cutie completely stole the judges’ hearts when she started singing LeAnn Rimes‘ iconic hit, “Blue.” LeAnn was only 13 when she recorded the song for her debut album, and her performance was quite captivating.

We could say the same about Dyxie’s performance of the song, because it was as sweet as could be. With a few more years of experience, she has the potential to be a big star!

Clearly, the judges felt the same way. It didn’t take them long to all vote “yes” for Dyxie and give her a golden ticket to Hollywood!

However, Perry made sure to write a note that the ticket would only be valid in 2026, when Dyxie is 15.

As for big sister Layla, she also earned a golden ticket to Hollywood with her soulful performance of a Jackson 5 classic.

While the judges admitted that she needs a little more time to grow and refine her voice, they still felt confident enough in her talent to send her to Hollywood. She ended up making it pretty far in the show!

You can watch both of the Spring sisters audition for American Idol in the clip below. We sure hope that little Dyxie will return if the show is still on the air in 2026, because she is a total sweetheart!