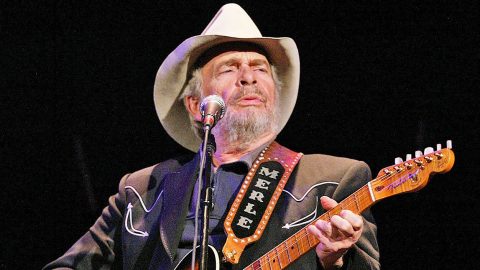 Merle Pens A “Poem” For The Everyday Man

There’s a reason Merle Haggard was known as “The Poet of the Common Man.” Haggard came from a working class background, and used his life experiences as a source of inspiration for many of his countless hits.

Although Haggard went on to become one of country music’s legendary artists, he never forgot where he came from. Because of that, he was easily able to connect with the working class through his songs and stories about common people living common lives.

Out of all of Haggard’s many songs that celebrate the working man, none is more well-known than his 1969 single “Workin’ Man Blues.” The song claimed the top spot on both the U.S. and Canadian country charts following its release. Haggard wrote the song entirely on his own, with the lyrics celebrating the effort the working man puts into each day:

“I’ll be working long as my two hands are fit to use
I drink a little beer in a tavern
Sing a little bit of these working man blues.”

Today, “Workin’ Man Blues” is considered to be the ultimate blue collar anthem in country music. That’s why it should come as no surprise that it is one of Haggard’s most frequently covered singles. Check out what we consider to be the top five performances of “Workin’ Man Blues”!

Would we really put anyone else at the top of this list?

Although many talented artists have delivered impressive renditions of “Workin’ Man Blues” over the years, no one can top the way “The Hag” did it. One of his best performances of the song was during his debut appearance on the popular PBS music series Austin City Limits.

“We always do two or three for the workin’ man, but this is really the workin’ man’s song, one called ‘The Workin’ Man Blues,’” Haggard said in his introduction.

As Haggard pushes through the song, the ease with which he sings each word instantly draws you in. Besides showing off how talented he is a vocalist, this performance nails it when it comes to illustrating his unmatchable ability as a storyteller.

In one of the most epic collaborations ever, some of country music’s greatest outlaw singers came together for an unforgettable performance of “Workin’ Man Blues.”

As part of a 2005 CMT special called CMT Outlaws, five of the genre’s most well-known artists teamed up to sing Haggard’s iconic song. Led by “The Hag” himself, the group also consisted of Toby Keith, David Allan Coe, Billy Joe Shaver, and Jack Ingram.

Haggard was the first one out on stage, and everyone else followed as he started to sing the beginning portion of the song. From that moment on each of the other artists chimed in to sing a part, showing off their own unique styles in the process.

At the conclusion of the fun-filled performance, Haggard finished the whole thing off by singing the last few lines. It’s clear from the crowd’s reaction that they loved it, and we did too!

In 2010, Haggard received one of the greatest honors an artist could ever dream of. Along with other stars such as Paul McCartney and Oprah, Haggard was one of the honorees at the 33rd Kennedy Center Honors.

During the ceremony, Brad Paisley and Vince Gill paid tribute to Haggard with an electrifying performance of “Workin’ Man Blues.” With a song that relies so heavily on guitar work, who better to perform it than two of country music’s greatest guitarists and entertainers?

Haggard was clearly moved by the performance, and tipped his hat to Paisley and Gill at the conclusion of the song. We also feel like it deserves a tip of the hat, which is why it earned a spot on our list.

In 2014, a country boy with an old school, outlaw voice was crowned the champion of the popular singing competition The Voice. Craig Wayne Boyd always stayed true to his country roots during his time on the show, which is why it made perfect sense when he decided to cover “Workin’ Man Blues” during the semifinals.

Boyd managed to make the song his own by giving it a slight rocker vibe, but made sure not to deviate too far from its original country style. The result was a performance that left viewers sending in their votes to make Boyd the next “Voice.”

Another aspect of Boyd’s performance that makes it so intriguing to watch is the way he took absolute command of the stage. You can tell he was having a blast!

When a country music group teams up with two talented musicians to sing a classic song, the result is sure to be amazing. Such was the case when Diamond Rio collaborated with Steve Wariner and Lee Roy Parnell in 1994 to cover Haggard’s “Workin’ Man Blues.”

Crediting themselves as “Jed Zepplin,” the group’s cover was featured on an album in Haggard’s honor, called Mama’s Hungry Eyes: A Tribute to Merle Haggard. Other major country artists such as Brooks & Dunn, Vince Gill, and Alabama also recorded their own versions of Haggard’s signature songs for the album,

Jed Zepplin’s cover of “Workin’ Man Blues” was one of the most popular songs in the collection, and it broke into the top 50 on the Billboard country chart. The song became an even bigger hit with fans when the group released a music video for it, which features old footage of Haggard singing on a television in the background.

There you have it! Which one of these renditions of “Workin’ Man Blues” is your favorite? Check out one more performance of the song by Haggard in the clip below!