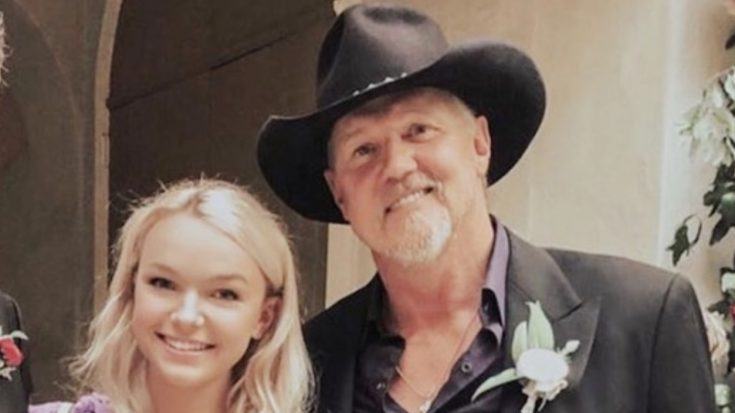 Trace Adkins may be known as one of the most “macho” singers in all of country music, but he has never shied away from showing his softer side. Over the years, Trace has released a number of sensitive songs about love and family, such as “You’re Gonna Miss This” and “Then They Do.”

Another one of his emotional songs, titled “Just Fishin’,” has an equally emotional music video to match. The video was filmed on Trace’s own property, and stars his youngest daughter, Trinity.

Trinity is the youngest of Trace’s five children, all daughters. Including Trinity, Trace’s girls are Tarah, Sarah, Mackenzie, and Brianna.

The second youngest of Trace’s children, Brianna, also appeared in one of her dad’s music videos as a child. That video was for “Ladies Love Country Boys,” in which Brianna made a brief appearance as a little girl who waved at Trace while he was hiding from a hoard of women chasing him around the city.

Little Brianna would have been no older than five at the time! You can see her brief appearance around the 2:30 mark in the video below.

Time has flown by since then, and Brianna is now 18 years old and all grown up. The cute little girl from “Ladies Love Country Boys” has now grown into a beautiful young lady.

Trace took to his Instagram to gush about his baby girl, who is in the process of chasing her dreams as a model. That dream became more of a reality when she was signed to AMAX Army, a modeling agency based in Nashville.

The proud papa shared a few of his daughter’s professional photos, with his team writing “he couldn’t be more proud of her.”

Follow Trace’s daughter Brianna on Instagram (@badkinss) and Twitter (@badkinss)! She recently signed with AMAX Army (@AMAXArmy) modeling agency and he couldn’t be more proud of her. ❤️

Isn’t she gorgeous? Trace has every reason to be proud of her!

See Some Of Her Stunning Photos

Brianna just started an Instagram of her own in the summer of 2017, where she shares a mix of personally taken photos and more professional shots.

Looking through her photos, it’s easy to understand why she was able to sign to a modeling agency at such a young age…she is simply stunning!

so happy to announce i recently signed with @amaxarmy ! so excited to begin developing with their awesome team!?⚡️

got to reunite with my bff today!! ??

If you’d like to keep up with Brianna’s journey, be sure to follow her Instagram @badkinss. We wish her the best as she takes off into this new and exciting phase in her life!

one last prog with my best friend! #stressedout #seniors

It seems like Brianna grew up fast, doesn’t it? We’re sure time flew by even faster for Trace…

Now that almost all of his kids are grown, we’re sure that songs like “Then They Do” have a whole new meaning for him.