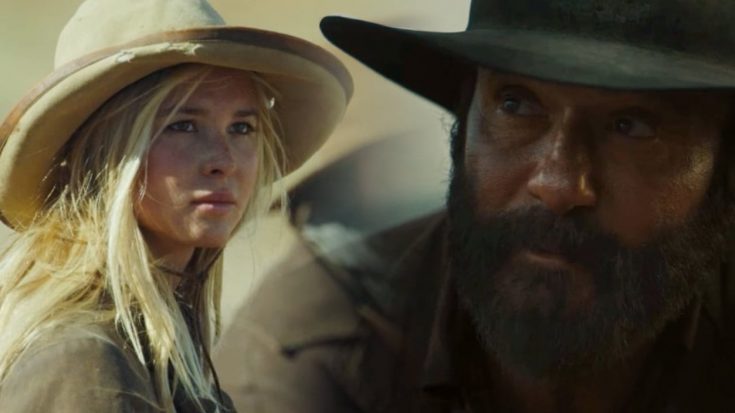 The travelers in 1883 face their fair share of challenges in the series’ first six episodes. Many people have died, supplies are dwindling, and they’re still nowhere near their end destination of Oregon.

Things get even worse for the pioneers in Episode 7, titled “Lightning Yellow Hair.” The new episode premiered on Paramount+ on Sunday (February 6).

We’ve got a full recap of the episode below. But be warned, the recap is full of spoilers. DO NOT keep reading if you don’t want to have anything spoiled for you.

The episode opens with the group passing through Comanche land. They pay a “tax” to them for allowing them to graze their cattle there, and invite two Comanche men to join them for a meal.

One of the men (played by Martin Sensmeier) notices Elsa Dutton (played by Isabel May), and is intrigued by her. He compliments her horse, who is named Lightning. When the man asks how Lightning earned his name, Elsa says it’s because he runs fast as lightning.

The man then challenges Elsa to a horse race, which she wins. After the race, the man says he will now call Elsa “Lightning Yellow Hair.” He then reveals his own name is Sam, and says he took that name from the man who killed his wife.

There’s an obvious connection between Elsa and Sam. They cement their new friendship with the exchange of gifts. Elsa gives Sam a lock of her hair, while he gives her one of his knives.

I’m quite certain that Elsa and Sam, within the span of a few hours, fell as deeply in love as any couple in cinematic history and I am so down for it.❤️ #1883Official #MartinSensmeier #LightningYellowHair #Comanche @paramountplus @1883Official pic.twitter.com/dngKdFLK22

That evening, Sam warns Captain Shea Brennan (played by Sam Elliott) about an approaching storm. He also tells Shea that bandits like to use storms as cover. Sam and the other Comanche man ride out soon after this conversation so they can avoid the storm.

Meanwhile, a restless Elsa can’t sleep. She speaks with her mother, Margaret (played by Faith Hill), and asks if she is happy. Margaret confesses that in general, she is not happy, she is worried. But she says in that moment, with her family, she is happy.

But that happiness is short-lived. The storm strikes the next day as the travelers are continuing through the plains. Concern turns to absolute terror as everyone realizes that the storm has produced a tornado.

Shea and Thomas (played by LaMonica Garrett) instruct all of the settlers to get out of their wagons and set their horses free. James (played by Tim McGraw) chooses to stay with Margaret and their son, John (played by Audie Rick), rather than go find Elsa. He calls Elsa a “survivor,” and has faith she’ll be alright.

Meanwhile, Elsa is watching over the cattle herd with the cowboys Wade (played James Landry Hébert) and Colton (played by Noah Le Gros). They let the cattle run off so they can find a safe place to bed down during the storm. While they contemplate where to go themselves, Sam appears and tells them to follow him.

As the storm comes closer, the foursome makes the decision to let their horses go. A saddened Elsa tells Lightning she loves him before setting him free, fearing she’ll never see him again.

Soon, the tornado is upon them. Sam brings Elsa down to the ground and shields her with his body. She is terrified at first, and screams as the storm rages on.

But then, in a surprising move, Elsa turns to Sam and kisses him. They share a passionate moment, forgetting all about the tornado tearing everything apart around them.

The storm passes just as quickly as it came, and the travelers inspect the damage. Though no one dies, many of their wagons and possessions are destroyed. Noemi (played by Gratiela Brancusi) is heartbroken to discover that the French mirror Thomas bought her in Episode 6 was shattered in the storm. She tells Thomas she has now lost everything she had, but he promises her he has enough money to take care of them both.

Much to Elsa’s relief, she finds Lightning and they share a happy reunion. She and Sam ride off to find the cowboys’ other horses. Once they do, Sam says goodbye, telling Elsa she is always welcome in Comanche territory.

Episode 7 of 1883. Wow. An absolute masterclass in nail-biting tension, storytelling and drama. Best bit of TV I've watched in a long, long time. No idea how any show is going to top this as the best series of 2022.

In the midst of the storm’s devastation, the group realizes that thieves have found their cattle. Shea, Thomas, James, and Elsa ride off to confront them, while Wade and Colton head back to camp. After they tell Margaret where her husband and daughter are, Margaret rides off to find them, telling Wade and Colton to guard young John with their lives.

When they ride up to the cattle herd, Shea, Thomas, James, and Elsa discover they are far outnumbered. A gunfight breaks out, and James tells Elsa to ride away and keep on going.

As Elsa rides, she is pursued by some of the thieves. But she does not feel fear in that moment. She views it as yet another race, and knows Lightning would win.

Sam remerges and kills the bandits following Elsa. He and the other Comanche man then go back to help Shea, Thomas, and James. The group also receives some help from an old acquaintance of Shea’s, Charles Goodnight (played by 1883 and Yellowstone creator Taylor Sheridan).

After the dust settles, they emerge victorious, though Shea, Thomas, and James are all wounded. Thankfully, none of them are fatally injured. The men thank Charles and the Comanches for their help in the gunfight. Sam and Elsa share a silent goodbye as Sam rides off for good this time.

The episode ends with Margaret encountering one of the bandits. He tells her to give him her horse, prompting her to raise her gun and kill him. In narration, Elsa tells us that Margaret cried that night as she lamented killing a man over nothing more than a horse. She says her mother now believes that only young John stands a chance of making it into heaven.

With only a few episodes left in the series, we’re anxious to see what will happen to the pioneers. Will they make it to their destination? Will we see Sam again? And on that note, will Elsa strike up a new romance after losing Ennis? Will our favorite characters survive? There are so many questions!