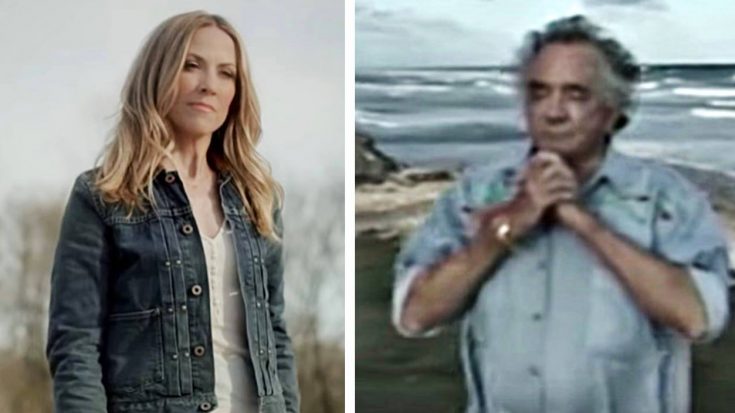 It has been 15 years since the world said goodbye to one of music’s greatest legends, but his newest project will leave you speechless. Music sweetheart and icon, Sheryl Crow, joined Johnny Cash for a chilling duet version of her 1996 ballad, “Redemption Day.” Aside from their harmonies together, the emotional and raw music video portrays a message all Americans need to hear.

The “Redemption Day” video begins with Crow playing piano in the middle of an open field. Quickly, vintage footage of days at war, street riots, and death unfold before the screen. As Crow serenades with her soft vocals, the disturbing images paint a picture of the world we all live in.

The second verse features Cash’s soulful debut with classic footage of The Man In Black himself. As he sings, more heartbreaking scenes take over the screen, from rapid wildfires, political debates, and even the 9/11 attack.

But as soon as the deep cords lighten up, for the verse, “There is a train, that is heading straight to Heaven’s gate,” images of hope and peace appear. Crow and Cash’s voices come together in harmony for a truly magical piece of music.

As the icons take turns singing, the images portray more and more horrifying realities of the world.

As the camera pans backward, you see the scenes all through the eyes of a child. As disaster, racism, and fear come into play, it’s shown just how many scenarios can affect younger generations.

Crow’s inspiration to re-record “Redemption Day” alongside Cash came from just how she was feeling toward the world today. According to Rolling Stone, she explained,

“I feel like the song has found its moment.” She continued, “I feel like Johnny Cash would have an opinion on what’s happening today. He was very outspoken. He was a great American in my estimation. He stood for the rights of Native Americans and he stood out against the Vietnam War and the Iraq War.”

Simply describing Cash in the perfect words, she ended, “He was who he was and he was going to say his piece and stand up for what he believed.”

Their duet and video for “Redemption Day” will move you in ways you never thought possible. Watch below.

Warning: some images are not suitable for all audiences.