Elvis Sings To God In 1972 “How Great Thou Art” Performance 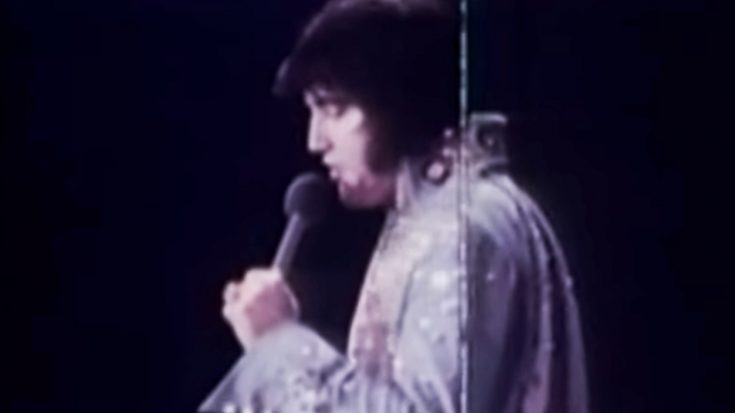 In a rarely-seen performance from over 47 years ago, Elvis Presley delivers an awe-inspiring performance of a classic gospel hit that can touch even the most distant souls…

Elvis, who was first-known worldwide for his incredible performance in rock and roll music, was truly a man of God and someone who had grown up with a very deep-running faith. Before he started singing as a profession, Elvis was brought up on standards from country, bluegrass, gospel and more. He’d known them all his life…and then later, he used that experience to help develop a whole new sound of rock and roll music.

Today in 1965, #ElvisPresley releases #CryingInTheChapel, his 1st US Top 10 hit in 2 years.

Originally recorded by The Orioles, the song was a 5-year-old outtake from #Elvis’s first gospel album, #HisHandInMine.

The song hit #3 in Billboard, #4 in Cashbox, & #3 in Record World. pic.twitter.com/pCoAGzoMzF

Throughout Elvis’ illustrious career, he often sang gospel at shows..intertwined with covers of new songs he’d heard and much of his own superhit rock songs and ballads.

It wasn’t until November 1960 that he finally released his first full-length gospel album, called His Hand in Mine.  It represented the heart and soul of Elvis and his lifelong love of church music.

The entire album was recorded during one 14-hour session with famous vocal quartet The Jordanaires supplying backup vocals for this long-anticipated project.

October 30, #Elvis1960
Elvis attends RCA studios in Nashville where he records fourteen Gospel songs for his upcoming LP “His Hand In Mine”. The album will reach #14 on the Billboard Hot 200 chart and be certified Platinum in #Elvis1992 #ElvisHistory pic.twitter.com/XbCjTKS7nO

While his stunning album is pure gold, there is one live performance Elvis gave in 1972 that will forever stand out in our minds.

Taking the stage in Hampton Roads, Virginia on April 9th, 1972 – exactly a week after Easter Sunday – Elvis delivered a performance of “How Great Thou Art” that shows a chilling change in his facial expression you have to see to believe.

About halfway through this performance, one of the three cameras trained on him catches a glimpse of his expression as he sings his heart out for the Lord. A stunningly-obvious look of peace and contentedness washed across him – and there’s only one reason why.

Being a man of faith, Elvis knew and believed that every single word he sang was a prayer, connecting him to the Lord and bringing true peace to his soul.

Watch this one-of-a-kind performance from the one and only Elvis Presley below – and when you spot his change in expression, you’ll know exactly what it means.