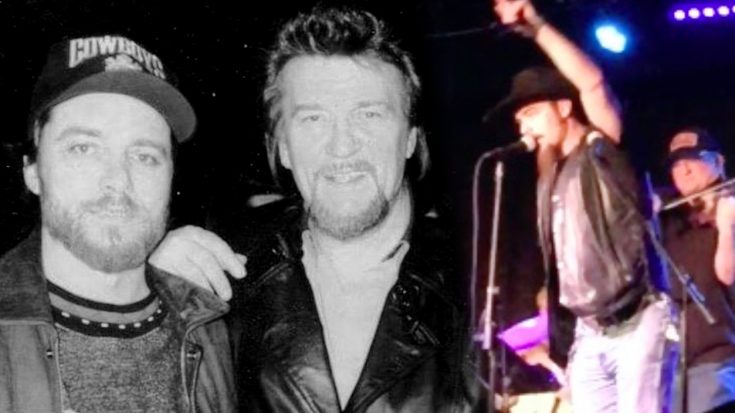 Waylon Jennings was only 19 years old when his first child, son Terry, was born. As a result, the two basically grew up together, with Terry saying they had “more of a brother-brother relationship” than that of a father and son.

Terry dropped out of school at the age of 15, and joined his dad on tour. He wrote about that whole experience and many others in his book Waylon: Tales of My Outlaw Dad.

Happy Birthday @TerryJennings33! We were able to talk to Terry last year on the @OLRPodcast about his book "Waylon:Tales Of My Outlaw Dad." It was a fun conversation. If you don't have the book, I would highly recommend checking it out! pic.twitter.com/mAUhw5bjkv

While he never got into singing like his half brother, Shooter (son of Waylon and Jessi Colter), Terry passed the musical torch on to one of his own children.

His son, Whey, is a country singer, and is often recognized for looking and sounding a lot like his grandpa.

I want to wish you all a safe n happy New year. I thank y'all for ur support. Keep an eye out n stay tuned because…

Together, Whey and Terry had planned to celebrate one of Waylon’s greatest career moments during an event that took place on January 26. The event was celebrating the 40th anniversary of The Dukes of Hazzard‘s debut…and if y’all know anything about Waylon, then you know how that show was an iconic part of his career.

Waylon played the role of the “balladeer” in the series, serving as the narrator and the singer behind the show’s opening song. Even those who have never seen a single episode of Dukes can likely recite at least part of Waylon’s theme.

However, a somber cloud hung over what was supposed to be a celebratory night for Whey and all who took part in the Dukes anniversary event. That’s because just one day prior, Terry passed away.

Hello everyone,This is Terry's son Josh and with a heavy heart I am here to inform you all that my father passed…

“This is Terry’s son Josh and with a heavy heart I am here to inform you all that my father passed earlier this morning,” he wrote.

Terry’s brother Shooter took to social media to mourn, writing, “So sad to see ya go, Terry. I love you.”

So sad to see ya go, Terry. I love you. My brother Terry turned me onto Alice Cooper, The Moody Blues, Cream, Zeppelin and more. He was that older brother who had the killer record collection and the wild streak. Having one for him today. i listened to “Love It To Death” last night as I was going to sleep in Terry’s honor. Sad day.

Whey’s manager, Tammy, spoke on Whey’s behalf after his father’s passing, saying that Whey still planned to participate in the Dukes celebration in his honor.

“After discussion with his family , and in honor of now BOTH grandpa Waylon and father Terry , Whey has decided that he will continue on with the show. I pray that God gives whey and his family strength to pull thru (sic) this difficult time,” Tammy wrote.

Tammy, WHEY's manager here….. My heart is aching for WHEY and the entire Jennings family at this time. Sadly, Wheys…

And continue on with the show he did.

Reviving One Of Grandpa Waylon’s Songs

At one point during his performance, Whey took the time to dedicate a special song to his father. He told the crowd that he was going to sing “Jack of Diamonds,” a traditional Texas gambling folk song that was released on Waylon’s posthumous album Waylon Forever in 2008.

According to Whey, the track was his father’s favorite song of Waylon’s. Despite this, Whey had never gotten around to learning it, so he apologized to the crowd that he’d have to read the lyrics while he sang.

Before he kicked off his performance, Whey took just a brief moment to recognize his dad, saying, “This goes out to my father, and I love you daddy.”

One attendee caught Whey’s performance on film, and it’s quite emotional to watch. You can tell that the recent passing of his father was weighing heavy on his mind. An attendee who spoke to Classic Country Music said “there wasn’t a dry eye in the house” as Whey sang.

You can watch Whey’s emotional performance honoring his father by tuning in to the video below. We’re sure that both Terry and Waylon were smiling down on him in that moment.

One of the highlights of the Dukes Of Hazzard 40th anniversary celebration concert at the The Nashville Palace Jan. 26 was Whey Jennings singing "Jack of Diamonds" as a tribute to his father, Terry, who passed away a day earlier. It was Terry's favorite song performed by his father, Waylon Jennings. You can check out Whey's rendition tomorrow afternoon on Episode 3 of Fastline Fast Track.http://fasttrack.fastline.comCountry Rebel Outlaw Outlaw Country Music Cooter's Place Cooter's Place Nashville Cooter's in Luray, VA