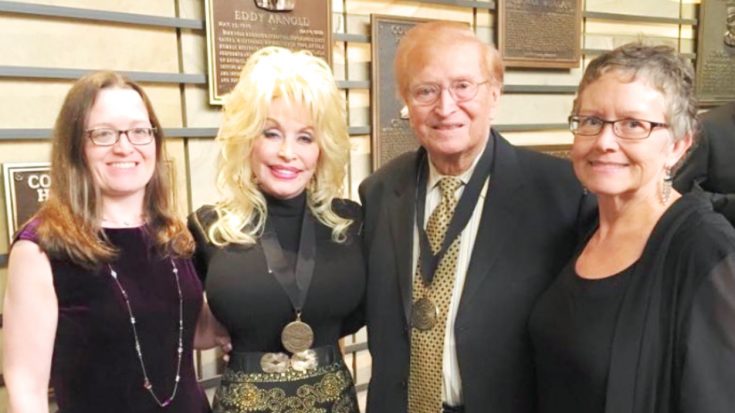 While singers tend to get all the credit in the music world, everyone knows their success wouldn’t be possible without the talented musicians behind them. This is something that the Country Music Hall of Fame acknowledges, as it occasionally inducts a dedicated musician into its elite membership

One such musician was guitarist Harold Bradley, who was inducted into the Hall of Fame in 2006.

We're deeply saddened to hear about the passing of Country Music Hall of Fame member Harold Bradley this morning. Our hearts go out to his family during this difficult time. pic.twitter.com/ypTpSOk5Pf

Bradley’s career got off to a good start in Nashville. As a teen, he earned a spot in Ernest Tubb’s band. But his music career had to be put on hold for a bit while he served in the Navy during WWII.

After returning from war, Bradley jumped right back into the music world, and started playing at the Grand Ole Opry while he majored in music in college.

Eventually, Bradley went on to play for some of the biggest names in the country music industry. Just a couple songs that feature his instrumental work include Alan Jackson‘s “Here in the Real World” and Loretta Lynn‘s “Coal Miner’s Daughter.”

So Much More Than A Musician

In addition to playing guitar for other stars, Bradley was a record producer, TV musical director, and an artist himself. Back in 1964, Billboard declared him as one of country music’s most promising artists based on the records he released at that time.

As if all of that wasn’t impressive enough, Bradley was also the first-ever president of the National Recording Academy of the Recording Arts and Sciences, the powerhouse behind the prestigious Grammy Awards.

Country Music Hall of Fame guitarist Harold Bradley, who played on recordings by Patsy Cline, Tammy Wynette and countless others, has died at the age of 93 https://t.co/JjB0FEd3FI pic.twitter.com/qVMlFvlMmB

Based on everything he accomplished throughout his career, it came as no surprise when Bradley was inducted into the Country Music Hall of Fame in 2006.

“For decades, Harold Bradley went to work doing something that he called ‘playing,'” said Country Music Hall of Fame and Museum CEO Kyle Young. “He surveyed every sonic situation and determined what he could do to make things better, more melodic, and more harmonious. There are lessons in Harold’s approach to playing that go far beyond music.”

"For decades, Harold Bradley went to work doing something that he called "playing." He surveyed every sonic situation and determined what he could do to make things better, more melodic, and more harmonious. There are lessons in Harold's approach to playing that go far beyond music. He lived his life with kindness, gentility, and discretion. On hopeful days, I will try to view Harold Bradley as an inspiration and not an aberration." – Kyle Young, CEO, Country Music Hall of Fame and Museum

And Bradley’s legacy will go far beyond the span of his life, which sadly, came to an end on Thursday morning (January 31).

Bradley’s daughters confirmed his passing on his Facebook page, writing that he “died peacefully in his sleep” at the age of 93. Despite everything that he had accomplished as a musician, his daughters said that to them, the greatest thing he ever did was serve as a father.

“But to us, his greatest accomplishment was being the best dad in the world. We love you, dad,” their message read.

This is from Harold’s daughters. Early this morning Harold died peacefully in his sleep. Many of you know him as a…

A Sweet Tribute From A Dear Friend

Since Bradley’s influence was so great, the country music community went into a deep state of mourning after the announcement of his death. One of the most touching tributes came from singer and actress Mandy Barnett.

Bradley had been a member of Barnett’s band, and was also someone she viewed as a friend. “He was a brilliant musician and the greatest person I’ve ever known,” Barnett wrote.

My band member, creative collaborator, and dear friend Harold Bradley passed away early this morning. There will never…

You can tell just from reading Barnett’s post how much of an impact Bradley had on the people he played for and interacted with.

Our prayers go out to Barnett’s friends, family, and loved ones during this sad time. Please, remember him by watching him play the song “Lara’s Theme” from the movie Dr. Zhivago during an appearance on Country’s Family Reunion.

May Bradley rest in peace. He will be so dearly missed.