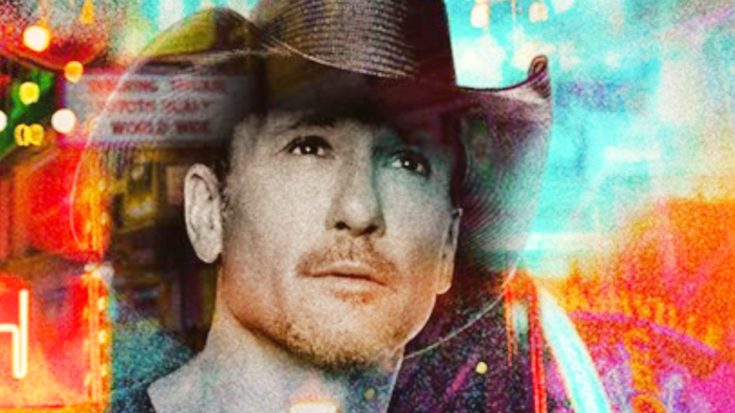 As Tim McGraw made clear from the get-go, his new single “Neon Church” is nothing like the songs he released in the past.

Both these songs were ready to be heard and will absolutely give a sense of where I’m going with my next project. They're meaningful to me and show the diversity of what I’ve been working on musically, I hope you like em! #NeonChurch

Once fans finally got the chance to hear “Neon Church,” they understood what he meant when he said that his next project will be full of “diversity.” The song mixes an interesting blend of sounds, including that of a church organ.

From the opening notes, you’ll realize that “Neon Church” may be McGraw’s most unique-sounding single to date.

A song that stands out as much as “Neon Church” was deserving of a matching video.

As is the typical style these days, McGraw chose to release a lyric video for “Neon Church” before debuting a traditional music video.

Lyric videos have grown more elaborate over the years, with some being as intricate as music videos themselves. Just take the lyric video for Carrie Underwood‘s hit single “Cry Pretty” as a recent example of how detailed lyric videos have become.

Since lyric videos have now turned into their own art form, McGraw and his team had to do something special to make the video for “Neon Church” stand out. That’s exactly what they did, choosing to portray the lyrics in a way you’ve likely seen no one else do before.

McGraw started teasing sneak peeks of the video on October 17. In a short clip shared to social media, various people can be seen waving what appears to be flashlights in order to create words, lines, and shapes.

This was all to show how the lyric video for “Neon Church” was made. As McGraw revealed, the lyrics were created using nothing but light as a medium.

On Monday we’re releasing something special, can’t wait for you to see it! #NeonChurch pic.twitter.com/pdbBWGucuA

Once the video made its debut, McGraw clued fans in on how they were able to create it. He said they learned about a “light painter” named Patrick Rochon, and fell in love with his work.

McGraw and his team invited Rochon to help create the video for “Neon Church,” which he did using “light as paint and darkness as canvas.”

We wanted to give you something really special with this lyric video
We were blown away with @Patlightpainter’s work. He’s an artist who uses light as paint and darkness as a canvas. That couldn’t be more perfect for #NeonChurch

Obviously, the idea of using light to showcase the lyrics to “Neon Church” was just too perfect to pass up.

The full video made its debut on Monday morning (October 22), and it’s as gorgeous as can be. You’ll be left in awe as you watch the people in the video delicately “paint” the lyrics of the song using nothing but light.

Enjoy the breathtaking splendor of McGraw’s lyric video for “Neon Church” below. How in the world will he ever outdo this when it comes time to make the real music video?