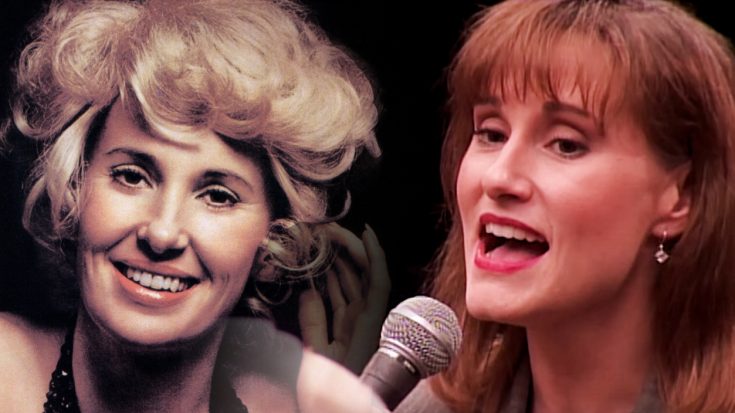 Surrounded by country music legends, their family members, and broadcasted into homes across America, this young daughter of two country legends honored her late mother by singing one of her biggest hits…

Sitting down for a song with Country Road TV for their series Country’s Family Reunion, Tamala Georgette Jones took a deep breath before issuing the first note of her mother’s iconic hit, “Apartment #9”

Written by none other than the legendary Johnny Paycheck, “Apartment #9” became his biggest success as a songwriter and was the very first song to become a chart hit for Tammy Wynette.

Wynette, who was often referred to as the “First Lady of Country Music,” released this unforgettable song as her debut single in 1966. Her career skyrocketed after the success of this country classic.

Georgette Jones, who is the daughter of Wynette and George Jones, has dabbled in country music as a profession and, as such, has made numerous appearances as a performer – often singing some of their greatest hits.

Happy birthday Johnny Paycheck. It was 1967 he sat in our kitchen with dad in Las Vegas and they penned “Apartment Number Nine” which became Tammy Wynette”s first hit. Paycheck wrote the line, “loneliness surrounds me without your arms around me.” pic.twitter.com/ye2A6YabvR

In this rare and stunning performance, she sings her mother’s hit debut single with every fiber of her being – and the emotion behind it really resonated with the audience.

Many people who have watched this video express just how much she sounds like her late mother – and she does a remarkable job!

What do you think of Georgette’s tribute to Tammy Wynette? Watch it below!