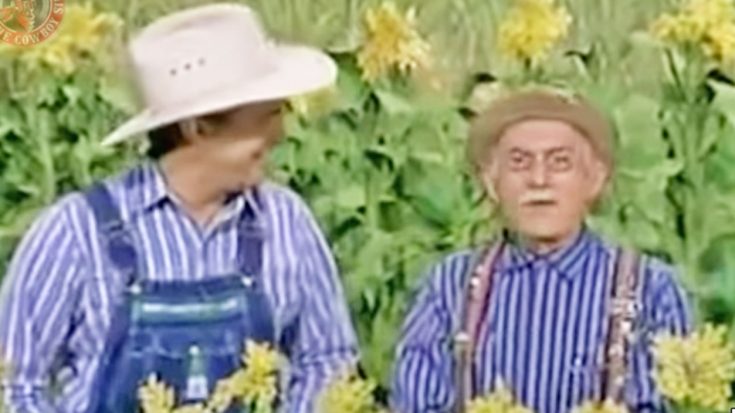 With an endless plot of country music and witty jokesters, the TV show, Hee Haw became an American classic. The first episode aired in 1969 and went on for 20 years of success with cameos from some of country music’s biggest stars. Loretta Lynn, Johnny Cash, Dolly Parton, Garth Brooks, Conway Twitty, George Jones, and Merle Haggard all appeared on the show over its span of 25 episodes.

Comedy In The Cornfield

The show carried a series of recurring sketches and segments that viewers couldn’t get enough of. One of their most memorable sketches was “Comedy In The Cornfield.” The sketch involved cast members and guests “popping up” to tell jokes and “corny” one-liners. Guest stars started to appear more in these sketches toward the later seasons. One of the most hysterical cornfield scenes was filmed when Garth Brooks came on as a guest.

The sketch began with Garth and Grandpa Jones in the cornfield wearing matching overalls and striped button downs. Grandpa started by telling Garth a joke about what he does when he sneezes. Before Grandpa can even finish his sentence, Garth falls on the ground from laughter. Garth then pulls a joke on Grandpa telling him, “You can call me Clint.” Garth can hardly stop laughing before the Grandpa finally finished his joke.

As the sketch went on, other members of the Hee Haw cast popped up to tell their own jokes. Toward the end, Garth appeared with cast member, Irlene to tell her one of his own jokes.

“Garth, don’t be ridiculous! How could you ever get a germ to exercise?”

Of course, Garth had no other response than a head shake. To add to the hysteria, a sign is held up at the end that reads,

“AT LEAST THE MUSIC IS GOOD!”