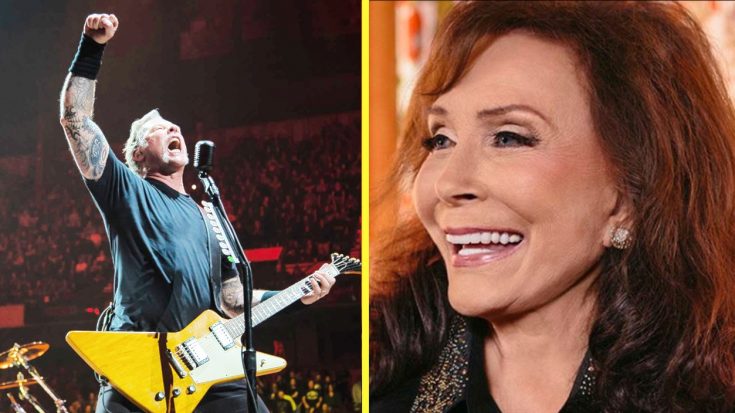 When you think of the heavy metal band Metallica, we’re going to assume the last thing you correlate them with is classic country music.

Well, all that is about to change because during their January 2019 tour stop at Nashville’s Bridgestone Arena, they snuck in a country classic into their hard-rocking 18-song setlist. It was so secretive, and possibly even spur of the moment, that it wasn’t even written down on the set list the band uses on stage!

Because they were performing in the capital of country music, while James Hetfield (lead vocals and guitar) and Lars Ulrich (drums) were taking a short break, Kirk Hammett and Rob Trujillo decided to pay tribute to someone who is synonymous with country music – Loretta Lynn!

Singing her 1971 hit song “You’re Lookin’ At Country,” the two hard rockers got the crowd to clap along to the beat while paying tribute to a true Nashville legend.

Lynn got word of the performance and even posted a video of it on her official Facebook page saying, “Well, y’all aint [sic] gonna believe this! Check out Metallica covering my song, ‘You’re Looking At Country’. Now I’ve seen everything. I loved it, boys! Keep rocking and it’s good by me if you do a few more of mine. Maybe I’ll have to sing one with you sometime!”

You're looking at Country…..Metallica Style!

Well, y'all aint gonna believe this! Check out Metallica covering my song, "You're Looking At Country". Now I've seen everything. I loved it, boys! Keep rocking and it's good by me if you do a few more of mine. Maybe I'll have to sing one with you sometime!

The Tennessean‘s Dave Paulson was at the show and filmed the performance from a different angle. Watch it below. This is something that will probably never happen again!