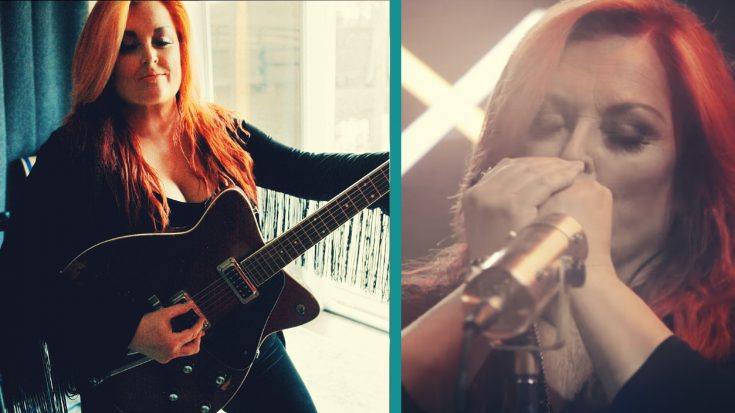 At the edge of a complete cultural renaissance, as described by Rolling Stone, Wynonna Judd is breathing new life into her illustrious career that has spanned the majority of four decades…

Judd, who got her start as part of the famous mother-daughter country duo, The Judds, alongside mom Naomi Judd – has chartered her own magical and unique journey as a solo artist since the debut of her self-titled solo album in 1992.

#OTD in 1985, The Judds dropped their sophomore album, Rockin' With the Rhythm. It shot straight to No. 1, as did all four of the singles released from it. Don't miss more of their story in the "Dream Chasers" exhibit, now open at the Museum. #cmhof @Wynonna @TheNaomiJudd pic.twitter.com/SkN5cMUUWU

In the decades since, she’s earned a bevy of No. 1 singles, Top 10 hits, and platinum-selling albums. From day one, she’s been signed to Curb Records – but that’s all about to change.

As part of her fresh take on music, life, and her goals for the future, Wynonna Judd is changing record labels – and she’s thrilled about it!

Joining the ranks of Merle Haggard, Neko Case, Afrobeat, and others on this eclectic punk-flavored label, Judd has signed with Anti Records and they offered her exactly what she’d been looking for: a deal that focuses more on the music and less on the marketing. Even the head of the label chose to visit her Tennessee farm instead of hold a traditional office meeting.

“Anti gives me room,” Judd says to Rolling Stone. “I feel like they get me and they understand that I’m literally one minute listening to Bessie Smith and then the next minute Ann Wilson and Emmylou Harris. It’s crazy. My greatest challenge this year will be focus.”

Couldn't be happier to welcome the legendary @Wynonna to our family! Read her @RollingStone feature below! https://t.co/aCROQc2oS8

On top of her new record label change, Wynonna Judd also released one of the most-intimate and personal recordings of her life. Giving her own soulful and bluesy take to the beloved standard “Feeling Good,” she unleashes a part of her inner self that will blow anyone away – she was even surprised herself!

“What came out of my mouth surprised even me,” she explained. “I just belted it out.”

From the inner sanctuary of her beloved farmhouse, Judd took to a massive and sparsely-filled room with vaulted ceilings. It has just one chair in the room from which she looks out across her fields that show a beautiful pond and pasture. She calls the chair her “prayer chair.”

Naturally and effective acoustic space, the design of this room allows it to be filled to the brim with sound – especially singing.

It was in this room that she chose to record her cover of “Feeling Good” – and it happened in a spontaneous moment. With just her iPhone recording the ballad, her natural talent shines in this one-of-a-kind recording and reminds us all just what Wynonna is capable of.

Check out the full clip below and let us know if you’re ready for her new album in the comments!