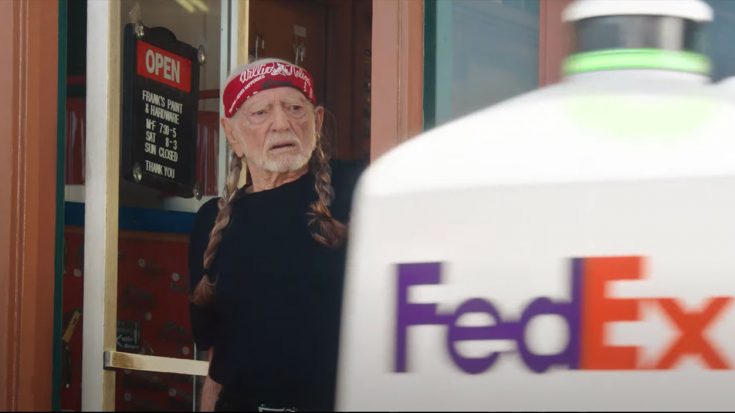 FedEx has launched a new commercial announcing its new sustainability goal. Their goal is to go greener as a company and who better to make a cameo appearance in a green commercial than Willie Nelson?

The ad features oversized delivery boxes popping up in front of a farmhouse, forests, and in the middle of a town square. As the boxes open up, it turns out they were housing a delivery man with FedEx’s reusable box, an electric delivery truck, and even a plane.

The soundtrack to the ad features Nelson’s song “Always on My Mind.” Shotgun Willie himself makes an appearance with “Roxo” – FedEx’s SameDay Delivery Bot which is currently in development.

Nelson is walking out of a hardware store when he sees the robot passing by him on the sidewalk. With a look of awe on his face, he exclaims, “I thought I’d seen it all!”

FedEx launched the ad on April 29, 2021, which happened to be Nelson’s 88th birthday. In the ad, the company mentions that all FedEx packaging is recyclable, and the company is investing in more electric-powered vehicles, as well as working on aircraft fuel conservation as it strives for carbon neutrality by 2040.

Watch Nelson’s appearance in the video below.