Why Ann-Margret Refused To Call John Wayne “The Duke” 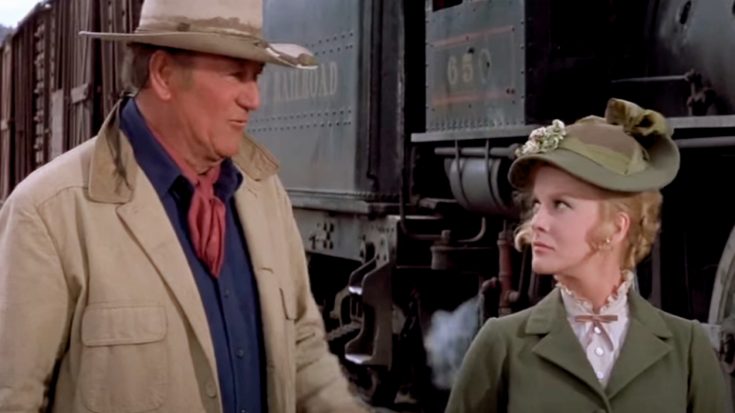 One of the most-loved blonde bombshells from Hollywood’s golden era had a unique relationship with one of her famous co-stars…and refused to call him by his renowned nickname.

Lane (John Wayne) and Mrs. Lowe (Ann-Margret) at the site of the gold stash in Mexico. The Train Robbers 1973.#JohnWayne #AnnMargret pic.twitter.com/AHzRbUDB5n

Ann-Margret, known for her work on movies throughout the 1960s and 1970s, starred in one film alongside the one and only “Duke” – John Wayne. The film wasn’t one of his bigger hits but remains an interesting part of his filmography nonetheless.

Ann-Margret featured in the July 1973 issue of Photoplay starring with John Wayne in The Train Robbers. pic.twitter.com/Aj2V655h45

Titled The Train Robbers, the film was released in 1973 – but has remained a mostly forgotten part of his legacy due to the lack of popularity among fans.

Referred to as “The Duke” by both the public and almost everyone he came into contact with, John Wayne’s childhood nickname stayed with him for his whole life. It was such a big part of who he was that it’s even used on the covers for his movies that are sold in stores!

Ann-Margret and John Wayne on the set of the film "The Train Robbers" (1973) ? pic.twitter.com/HV33H2pLou

While working with John Wayne, this famous Hollywood actress had refused to call him by his nickname – something that was uncommon at the time.

In a 2014 interview with InterviewMagazine, she revealed the reason that she never chose to use his nickname…

“We were shooting in Durango, Mexico and my parents came down to visit me,” she told the publication. “He was so great with my parents. So absolutely welcoming and gentle with them. And anybody who was great to my parents was on a throne in my eyes.”

“When I die, I want Ann-Margret to dance on my coffin. If you don't see me in five minutes, you'll know I'm dead for sure." – John Wayne on former co-star Ann-Margret pic.twitter.com/AfPiGTYYTf

While John Wayne was great to her and her parents, Ann-Margret reveals that due to the way she was raised and where she was from that prevented her from referring to The Duke by his common nickname.

“When I came to this country, first of all, mother and I didn’t know English,” she said. “I would curtsey, then say, ‘Thank you,’ and then when I was leaving, curtsey. For example, we went to Dallas to introduce a film I did with John Wayne. And I never called him Duke. I just couldn’t. That’s the way I was raised. When you meet someone, you say either Mr. or Mrs. or Miss. You stand up.”

See Ann-Margret and John Wayne in several clips from The Train Robbers below.