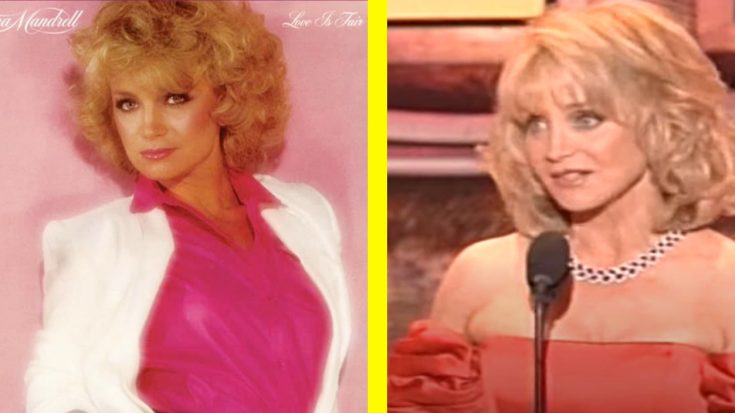 Starting at a very early age, Barbara Mandrell was already known as a musical prodigy after drawing the attention of famous musicians like Chet Atkins at a Chicago music trade convention. But, by the time she’d reached the age of 55 she had stopped performing completely, sold all of her instruments, and vanished from public view…

ON THIS DAY in 1971, Barbara Mandrell’s debut album, ‘Treat Him Right’ was released, featuring a cover to the Tammy Wynette song, “He’ll Never Take the Place of You” written by Billy Sherrill, Bob Johnston and Charlie Daniels – TeamCDB/BW pic.twitter.com/8Mmrl2SmUA

Starting with her 1971 debut album (as seen above), Barbara Mandrell soared across both the pop and country charts with a seemingly endless number of hit songs and back-to-back albums. At the time of her debut, she was just 23 years old. Unknown to anyone at the time, just barely a decade later she would experience a horrifying and tragic event that would stain her public image and leave her suffering for years to come.

At the peak of her popularity, Mandrell was involved in a fatal car accident when a 19-year-old college student crossed into her lane and struck her car head-on. She had her two children with her and they suffered minor injuries while she came away with multiple fractures, a broken thigh bone, ankle, and knee.  She also suffered a severe concussion which caused memory loss, speech difficulties, and some personality changes.

"It seems to me that unless you or someone very close to you has had a bad head injury, you really can't fathom it. You have no concept of what it is all about. It was so difficult for my whole family, not just me." -Barbara Mandrell #quotes

After the crash, Mandrell took about 18 months off of work to focus on her health and her family. Then, due to a requirement by state law, Mandrell made headlines as she was forced to file a lawsuit against the family of the teenage boy killed in the car accident in order to recoup money from the insurance company.

At the time, the father of the boy knew that she wasn’t personally trying to go after him for $10 million, but it was a requirement he was named in the suit by law.

That didn’t matter, all people across the country saw was that a famous musician was suing the family of a kid killed in a car accident.

It was at this point that her career started to shift in a different way. She already had an incredibly successful TV Variety Show, a massive musical legacy, and a lifetime’s worth of memories to relish in. Within just barely more than a decade, she would retire from music forever.

In the years since her October 1997 retirement, she has made a handful of appearances for special occasions (like the CMA’s 50th) but has not performed a concert or released an album since.

The choice to retire for Barbara Mandrell was an incredibly personal one. She and her husband Ken Dudney had welcomed their third child into the world just a year after the car accident and she wanted to spend more time with her family at home. Her youngest had just turned 12 and she leaped at the opportunity to spend his teenage years as a stay-at-home mom.

Watch this intimate interview with Barbara Mandrell and Barbara Walters below.